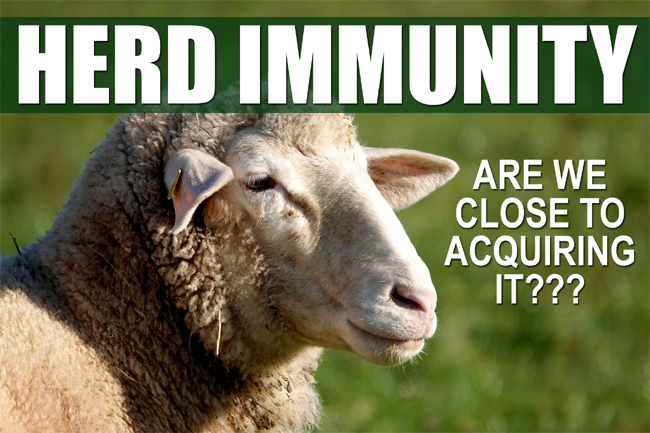 A new study from Penn State calls into question just how prevalent the Covid-19 virus is in the US—especially during the early days of the pandemic (January to mid-March). The researchers contend that the number of coronavirus cases “may have been more than 80 times greater” than previously thought—and “doubled nearly twice as fast as originally believed.” However, some are using the high initial infection rate advanced in the study to support the theory that we are close to achieving herd immunity and the worst is behind us. Is that really the case?

The study, published June 22, lends credence to original estimates of a Covid-19 R0 (pronounced “R naught”) in the range of 4 to 7—corresponding to a very high rate of transmission.

R0 is simply a mathematical term that indicates how contagious an infectious disease is—also referred to as its reproduction number. Currently, experts place the median R0 value at around 5.7 for the novel coronavirus (SARS-CoV-2).

While the researchers have not raised the specter of herd immunity, many others have seized on this new research to argue that we are, in fact, very close to achieving it—much closer than ever thought. Which, they contend, means the worst is behind us, the wind is at our collective backs, and there’s nothing but blue skies before us.

Let’s analyze this new study and explore the ramifications for the “herd immunity” hypothesis.

The Penn State study was predicated on the suspicion among many epidemiologists that “the initial COVID-19 infection rate was undercounted due to testing issues, asymptomatic and alternatively symptomatic individuals, and a failure to identify early cases.”

We would argue that this is a no-brainer. Most rational people acknowledge this as an unambiguous fact.

However, where this study differs from others is in its approach to testing that hypothesis. Rather than utilizing limited and questionable serological (antibody) data, the researchers employed a novel approach: identifying excess influenza-like illness (ILI) from the CDC’s surveillance data.

We actually think this is a brilliant way to approach the problem and have argued for its usefulness when attempting to accurately identify Covid-19 deaths. In other words, rather than depending on individual case findings (highly subjective), we can arrive at a much more accurate number from a macro perspective by identifying excess deaths—those likely to actually be Covid-related.

Justin Silverman succinctly explained the methodology behind the study:

“We analyzed each state’s ILI cases to estimate the number that could not be attributed to influenza and were in excess of seasonal baseline levels. When you subtract these out, you’re left with what we’re calling excess ILI—cases that can’t be explained by either influenza or the typical seasonal variation of respiratory pathogens.”

The researchers claim that in doing so they identified a nearly perfect correlation between excess ILI and the spread of Covid-19 around the country.

However, it is worth noting that we haven’t reviewed their actually data yet. Though, we are willing to tentatively accept it for argument sake, especially given that we agree with the approach.

What they discovered was that “the size of the observed surge of excess ILI corresponds to more than 8.7 million new cases during the last three weeks of March, compared to roughly 100,000 cases that were officially reported during the same time period.”

This also corresponded to a three-day doubling rate for the virus.

It is critical to note, that they also observed a peak in excess ILI in mid-March—corresponding to the wave of government interventions. Incidentally, this demonstrates that those interventions, in retrospect, were actually highly effective. Unfortunately, we may have just given up to quickly—unable to recognize enough tangible (visible) benefits in the short run.

In the end, their conclusion was simply that the impact of the virus early on was more attributable to its high rate of transmission than its lethality.

Unfortunately, as has been the norm throughout this pandemic, many have quickly seized upon this study to argue that (1) we are now very close to achieving herd immunity and (2) the worst is behind us now—it’s all rainbows and unicorns from here on out.

First, this was not the conclusion advanced by the researchers themselves.

Second, this ignores their contention that excess ILI peaked in mid-March—when the prevalence of the virus was estimated at only around 9 percent in the most hard-hit areas.

Even if we extrapolated our current identified cases (multiplying them by 80), we only arrive at just over 200 million cases… or a prevalence of roughly 60 percent.

This would represent the maximum (worst case) possible prevalence. However, (1) it is still below the required amount for herd immunity (we’ll look at that in a moment) and (2) ignores that the spread peaked in mid-March and was subsequently reduced significantly by interventions.

In reality, we are somewhere between 9 percent and 60 percent—likely around 30 percent as a whole.

Clearly, with the unwinding of interventions and “reopening” of the economy, we are seeing a return to the high transmission rate—representative of a virus capable of manifesting an R-naught of between 4 and 7. We have consistently warned that this would be the inevitable outcome of such premature actions.

Remember, an R0 value is not static or absolute—it fluctuates based upon other environmental variables (e.g., interventions that serve to reduce transmission).

However, even with the recent and undeniable surge underway, we are still likely—at best—only halfway to achieving “herd immunity.”

Healthline notes that with an R0 of 5.7 (the median estimate), at least 82 percent of our population needs to develop immunity in order to achieve “herd immunity.”

The reality is that we are nowhere near the minimum required prevalence of 82 percent—the “herd immunity threshold” for Covid-19.

Also worth noting, D’Souza and Dowdy aptly point out that almost all modern examples of herd immunity were achieved via vaccinations—not natural exposure (e.g., measles, mumps, and rubella).

Furthermore, the idea of natural herd immunity is entirely predicated on the ability to acquire immunity.

However, nearly every single study that has been conducted to date has found that—at best—we can only acquire temporary immunity to Covid-19 for between 6 to 12 months.

Furthermore, that immunity depends on the severity of the case. In other words, the greatest level of initial immunity is acquired by those with the worst infections. Those with mild or asymptomatic cases likely acquire very limited immunity if any at all—immunity that can degrade in as little as 2-3 months.

Thus, even if we hit the magic level of 82% prevalence, we would have zero herd immunity beyond a rolling six-month period (plus or minus two months).

As we have seen, the Penn State study—via a novel approach—confirmed what most suspected: Covid-19 spread extremely quickly in the early days of the pandemic.

The impact of this was clearly visible in high-density hotspots like New York City.

However, the study did not conclude that we are near to achieving a prevalence level supportive of herd immunity. To the contrary, it clearly revealed that the government interventions (those very actions claimed by many to have been ineffective and/or unnecessary) significantly dampened the R0 of the virus—resulting in a greatly reduced spread.

The claims of many that this study supports the notion that we are close to achieving herd immunity, while arguably well intentioned, are baseless and counterproductive. They are biased by presuppositions rooted in a belief system—not rational opinions constructed on empirical facts.

Even if we were nearing the prevalence threshold required for herd immunity (which we are not), it is still just a make-believe pot of gold at the end of an illusionary rainbow. As of yet, nothing from the realm of science has indicated any possibility of acquiring lasting immunity to this novel coronavirus.

At best, most will acquire 6 to 12 months of degrading immunity—the rest will have between zero to 4 months.

Think about that for a moment. That means the majority of our current 2.5 million cases will become exposed to the virus again sometime between October and January—the heart of the next flu season.

Worse, we have no way to know—beyond the existing chronic consequences of a first exposure—if a second infection will be even more severe (as was the case with the Spanish Flu).

To learn more about the emerging consequences of infections—even when very mild, we encourage you to read our article Recovered Doesn’t Mean Healthy: The Untold Truth about Covid-19.

The takeaway from all of this is to continue prepping and taking appropriate steps to protect yourself and your family (i.e., mitigating, or at least minimizing, your risk exposure).

Don’t buy the hype being peddled by the cult of “it’s all over” and things will get better.

We can all hope and pray that it gets better. However, there is nothing in the science that gives any indication that this is the case. It’s a probability game at this point—and the odds must certainly include the very real possibility that things could get worse.

Short of an effective and overwhelmingly accepted vaccine, the odds of an escape via herd immunity is a very, very low probability—and, as we noted earlier, history bears witness to that.

Obviously, the short-term solution is to slow the spread (i.e., reduce the R0) again—as we began to do in mid-March. However, since it is unlikely that we can put the proverbial genie back in the bottle (that train has left the station), our best available option is to wear masks and practice social distancing—a position we discuss in our article Masks & Social Distancing: The Real Economic Opportunity Cost.

In the meantime, take every opportunity to continue prepping. If things get better, you lost nothing. If things get worse, you’ll be glad you did. It’s a win-win scenario—one that skews the risk-reward curve in your favor.

As always, continue hoping for the best, preparing for the worst, and—in all things—praying!