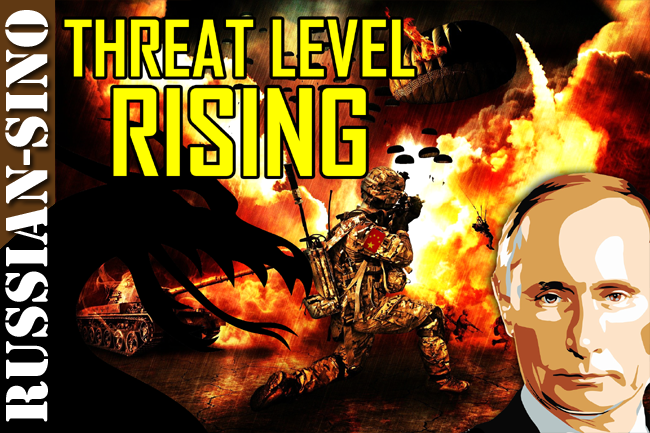 The Russian-Sino threat level was ratcheted up yet another notch as Russian President Vladimir Putin casually dropped a bombshell when he raised the specter of a potential Russia-China military alliance in the near future. His declaration served to further confirm the rapidly deepening partnership between Moscow and Beijing—bad news for the US, Israel, and the West.

What’s the common denominator between Moscow and Beijing driving the fatal attraction?

Escalating tensions in their relations with America.

Specifically, Putin stated that while a military alliance between the two nations wasn’t needed, “theoretically, it’s quite possible to imagine it.”

Such an alliance would be the first since the Treaty of Friendship, Alliance and Mutual Assistance between Stalin and Mao Zedong in 1950 that collapsed following the death of Stalin.

In response, Beijing noted that such comments “demonstrate the high level and special nature of our bilateral ties,” adding, “There is no limit to the traditional China-Russia friendship and no restricted areas for expanding our cooperation.”

The truth is that a soft alliance already exists—only it is referred to as a “strategic partnership.” For example, one needs only look at recent Russian-Sino war games that involved both militaries, as well as the increased sharing of sensitive military technologies between the two.

The Russian President added, “Without any doubt, our cooperation with China is bolstering the defense capability of China’s army.”

Experts note that Russia has significantly “pivoted” toward China after its annexation of Crimea in 2014 triggered Western sanctions and sunk relations to post-Cold War lows.

As we noted in our article US-China Tensions Escalate: Preemptive Sino-Russian Nuclear Strike Imminent?, there is a well-defined axis of cooperation developing between Russia, China, and Iran.

While we do not expect joint military operations, we have consistently held that the potential exists for them to act independently (against different targets) but simultaneously—greatly reducing the West’s ability to effectively respond.

For Russia, the move is likely to involve an attack on Israel (via Syria)—conducted in partnership with Turkey, Iran, and a host of other smaller nations. This will be the fulfilment of the biblical war of Gog and Magog (cf. Ezekiel 38 & 39).

Russia’s involvement continues to grow in the region—including the recent escorting of Iranian oil being transported from Iran to Syria.

The U.S. Naval Institute (USNI) reported that evidence indicates the Iranian-flagged oil tanker Samah was escorted from just outside the Suez Canal to Syria by two Russian Navy ships—including a destroyer.

This represents a blatant attempt by Russia to interfere with and circumvent international Iranian oil sanctions by preventing the interception of vessels illegally transporting oil from Iran to Syria.

The Samah, loaded with Iranian crude, went dark (i.e., turned off its AIS system) shortly after exiting the Suez Canal and was later seen on satellite traveling towards Syria in a loose formation with the Russian Navy ship Akedemik Pashin (an oiler used for underway replenishment) and what is believed to be the Udaloy-class destroyer Vice Admiral Kulakov.

It is believed that the tanker was later seen anchored off the Baniyas oil terminal in Syria.

Make no mistake about it, Russia is permanently and materially embedded in Syria—now maintaining a permanent naval squadron in the Mediterranean that is based out of Tartus, Syria.

Putin continues to aggressively invest in and expand the Russian naval base in Tartus—the only such facility outside of the former Soviet Union. It reached an agreement with Syrian President Bashar Assad to extend its lease (free-of-charge) on the facility for 49 years in 2017.

Putin has conducted military operations in Syria since 2015, assisting Assad in reclaiming control over most of the country.

The Tartus port is both a base for Russia’s Mediterranean fleet and a logistics hub for the Syrian campaign. Receiving Iranian oil there is critical to supplying their nearby air base in Latakia and, along with delivering Russian armaments and supplies, keeping the “Syrian Express” functioning.

Thus, both Russian and Iran are on the ground and actively involved in Syria—a partnership that will ultimately and inevitably draw them into an attempted invasion of Israel.

For China, the target will be expansion in the South China Sea, an invasion of Taiwan (see our article China Prepping for Taiwan Invasion: Is War Imminent for United States?), and inevitable direct conflict with the United States.

We assert that China could very well prove to be God’s chosen instrument to pass judgment on America. To learn more about this, we recommend reading our articles US-China Tensions Escalate: Preemptive Sino-Russian Nuclear Strike Imminent? and Mystery Babylon—God’s Judgment on America Forthcoming?

If Russia and China were to move independently but simultaneously (with a degree of coordination rather than actual integration), we would be facing massive military campaigns in two entirely distinct theaters of operation. An outcome that would be no bueno!

This is especially concerning given that our current military is designed around “immediate response force, contingency response force, and dynamic force employment enhanced readiness concepts.”

All of these strategic designs are very effective at fighting a war on terror, which requires quick, surgical strikes in a diverse and rapidly changing environment… but which are equally inadequate when it comes to dealing with a large-scale, conventional military offensive (let alone two).

While many vocal pundits are quick to dismiss the idea of a formal Russian-Sino alliance, others—including myself—argue that such dismissals are birthed from either complacency or arrogance.

Whether formal or informal, the military ties between these Russia and China continue to strengthen—a clear and present danger for America and the world.

And this only represents the tip of the proverbial iceberg when it comes to the myriad of threats we and the rest of the world face.

We are on the precipice of an apocalyptic transformation and living in a house of cards that is just waiting for one shock to send it crashing down.

Despite the cries of “peace and security,” the world is not getting better… it is rapidly becoming more and more instable and dangerous.

Do not be deceived.

If you are not BOTH spiritually and physically prepared… I urge you to do so while you still can!

The world can only stave off the inevitable for so long—and time is quickly running out.