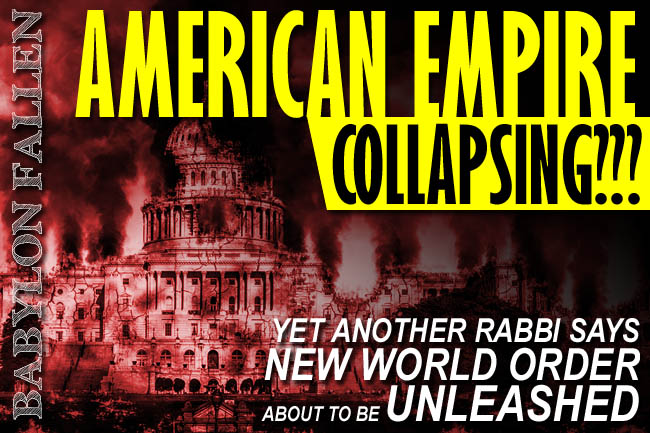 Jewish Orthodox Rabbi Alon Anava just released a shocking warning regarding the fate of the United States and the world as a whole in the wake of the American election—the fat lady is singing, and the end is near for Lady Liberty. Anava declares that the cataclysmic collapse of the American empire is not just at hand… it is unfolding before our very eyes.

At the end of a recent message, Anava spent 20 minutes making the case that “This election is going to change the entire face of the planet.”

Rabbi Alon Anava is a mystic who teaches the Torah—including Torah codes—to both Jews and Gentiles in the Galilee region of Israel. To be clear, I do not put any weight on the veracity or divine nature of gnostic mystic practices.

However, as we have always stressed, that doesn’t mean the declarations by mystic rabbis across Israel have no significance. To the contrary, it is abundantly clear that something spiritual is going on under the hood—be it of God or be it demonic influence.

Something is clearly going on behind the scenes. Something really big is fixing to go down folks. We all feel it—not just the mystic rabbis. And, for those studying the Scriptures and watching the signs, we can see it coming—like an approaching super storm.

For more examples of these widespread and rapidly increasing rabbinic prophetic declarations, I highly encourage you to checkout our articles:

Now, without getting lost in the proverbial weeds regarding Anava’s take on Torah codes referencing Trump, what is critical to judiciously consider is his assertion that “It’s almost irrelevant who is going to be the next president. Either way you’re looking at it, the redemption is going to come.”

The “redemption” Rabbi Anava is referencing is the arrival of the Jewish “messiah” and the redemption of Israel—ushering in the kingdom of God.

Note, this “messiah” will actually turn out to be the Antichrist, who will usher in a 7-year period of hell on earth—known as the Tribulation, Daniel’s 70th week, and the time of Jacob’s trouble.

While predicated on entirely different line of reasoning, Anava’s warning is nonetheless wholly consistent with our assertion that America is in fact the economic Babylon of Revelation… and that it will encounter sudden destruction under the judgment of God—see our formative article Mystery Babylon—God’s Judgment on America Forthcoming?

Rabbi Anava argues that the unfolding collapse of the American empire is both inevitable and inescapable because God is preparing the entire world for the arrival of the “messiah” to redeem all mankind.

He argues that within a few months, the great American economy will collapse, along with its once global power—to be followed by the complete collapse of countries around the world.

Rabbi Anava added that “Anyone who is against the program [of redemption] will not be part of it.”

Folks, that’s precisely what those warning of the New World Order have been saying all along—just from a different perspective.

What Anava sees as “good”—the arrival of a messianic figure who will take over the world and usher in a period of great peace, safety and prosperity—is actually the arrival of the Antichrist.

This is the very Antichrist who will, with the help of the False Prophet (i.e., the Pope), will implement a one-world government, one-world currency (economy), and one-world religion.

To learn more about the role of Pope Francis as the False Prophet and the reemergence of Satan’s false Babylonian religious system, we highly recommend reading our eye-opening articles:

Unfortunately, Anava and all his fellow Jewish mystic rabbis are deceived. This coming new world order and global ruler will NOT deliver peace, safety, and prosperity.

Rather, just as God has unambiguously declared to all in His Word, this evil team of demonic globalists will unleash a horrifying totalitarian system of control and worship… and God will pour out His wrath on a wicked world.

Thankfully, (1) the Jews will realize their mistake halfway through the 7-year tribulation period, (2) this apocalyptic period will be limited by God to seven years, and (3) it will conclude with the return of Christ to establish His 1,000-year physical kingdom on earth.

Unfortunately, if you miss Titus213 Airlines’ flight #777 (a.k.a. the Rapture), you will more than likely die before it all ends with Christ’s triumphant return.

If you think you can survive to the end of those seven years, I encourage you to read our article Coming Apocalypse: Are You Really Prepared for Armageddon?

What’s important to recognize right now is that we are now receiving a boundless number of warning signs from a plethora of diverse sources—critical indicators that are all flashing red and signaling that the start of this apocalyptic period of global tribulation is imminent.

The signs can no longer be ignored. Time is up and the ship is going down. The American empire is about to collapse. Your opportunity to place your faith in Christ and escape the coming nightmare is running out… you may only have precious moments left to make your choice.

God has not sprung this on mankind without warning. He has provided every conceivable sign to forewarn us about what is coming shortly. We ignore them at our own peril… and the consequences are eternal.

Understand, it’s not just the Christians… it’s not just the tin-foil hat wearing conspiracy theorists… it’s not just the signs being witnessed in the heavens and earth… it’s now a massive chorus of Jewish rabbis—including Rabbi Alon Anava—proclaiming a consistent message that we are on the precipice of a diabolical global change—a change unlike anything the world has ever seen before.

The collapse of the American empire is at hand… and the new world order is about to unleash its demonic apocalyptic vision for the world.

And the ten horns which thou sawest are ten kings, which have received no kingdom as yet; but receive power as kings one hour with the beast. These have one mind, and shall give their power and strength unto the beast.” (Revelation 17:12-13)

We are watching—if we have eyes that see—the new world order of the Antichrist and False Prophet arising before us.

That rise will require the collapse of the American empire and a great global reset… and it means we are closer to Christ’s return for His bride (i.e., the Rapture) than many could possibly imagine.

Folks, it’s time to finalize your preps—both spiritually and physically.