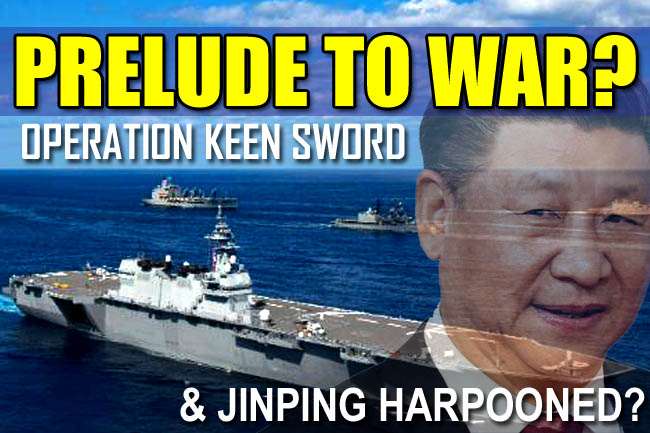 US-China tensions are at an all-time high, driven by a growing economic and military cold war. While the economic threat is being driven by China’s Belt and Road Initiative, the epicenter of the military threat is Chinese expansion in the South and East China Seas—specifically in the Taiwan Strait and the Senkaku Islands. What we are witnessing is the prelude to a coming war—a war that will trigger apocalyptic consequences for America and the world.

Recent developments have done nothing but amp up the tensions and rapidly increase the risk that things will escalate into armed conflict, including:

Given Xi Jinping’s “Mandate of Heaven” to expand the Chinese empire and dominate the world by any and all means necessary, it is becoming increasingly clear that the United States is on a collision course with Beijing—representing a colossal powder keg that will inevitably be detonated by a spark… whether accidental or intentional.

Given the unfolding prelude to war, it would behoove you to maintain a high level of strategic situational awareness and ensure that you are adequately prepared for all possible scenarios and outcomes!

It is not a question of if but when… and we should all be striving to mitigate the looming risks.

Operation Keen Sword—a large US-Japan joint training exercise—is being conducted in the East China Sea, in the vicinity of the Senkaku Islands and the Taiwan Strait.

The fleets involved in Keen Sword include ships from the Reagan Carrier Strike Group, more than 100 aircraft and ground forces, and comprises maritime, ground and air events. Carrier Strike Group 5 (CSG 5)—led by the Nimitz-class aircraft carrier USS Ronald Reagan (CVN-76), is the same group that has been conducting operations in the Taiwan Strait.

Air Force Lt. Gen. Kevin Schneider, commander of U.S. Forces Japan stated, “As we develop new and better ways to operate and integrate, exercises like this clearly demonstrate the growing strength of the U.S.-Japan Alliance.”

And who pray tell is the demonstration intended to influence? Why, Beijing of course!

Napoleon Bonaparte once quipped, “China is a sleeping giant. Let her sleep, for when she wakes she will shake the world.”

Well, it’s safe to say the lion has awoken and we are now poking her with sticks.

My point is not that doing so isn’t justified and/or warranted but, rather, simply that we should be wise enough to realize that when you poke a lion, you should expect to be attacked.

Part of the US-Japan Keen Sword operation includes a massive island-landing exercise—intended to be another warning to Beijing to tread lightly in the South and East China Seas (viz., with regards to Taiwan and the Japanese-controlled Senkaku Islands).

This landing exercise will include forces from Japan’s Amphibious Rapid Deployment Brigade and the Okinawa-based III Marine Expeditionary Force.

Known in China as the Diaoyus, the rocky Senkaku island chain (southwest of Tokyo) is claimed by both China and Japan—though the Japanese have administered over them since 1972 (and China claims literally everything as their own).

Like Taiwan, tensions over these islands have been rising for years—with neither side likely to back down.

This landing exercise will include forces from Japan’s Amphibious Rapid Deployment Brigade and the Okinawa-based III Marine Expeditionary Force.

Known in China as the Diaoyus, the rocky Senkaku island chain (southwest of Tokyo) is claimed by both China and Japan—though the Japanese have administered over them since 1972 (and China claims literally everything as their own).

Like Taiwan, tensions over these islands have been rising for years—with neither side likely to back down.

Lt. Gen. Kevin Schneider, commander of Forces Japan, stated that this island-landing exercise would demonstrate the ability of the US-Japan alliance “to deliver combat troops to defend the Senkakus or respond to other crises or contingencies.”

The second part of his remark is important, because it alludes to potential allied response options should China attempt to invade Taiwan. Furthermore, such a move by China to expand the nine-dash line would put both the Philippines (including key US military bases) and the southern Japanese islands at much greater risk.

Remember, America has a mutual defense treaty with Japan—one that obligates the US to defend the Senkakus as if it were our own territory. As they are located just to the north of Taiwan, this raises yet another opportunity for intentional or accidental American conflict with China.

While not a formal military alliance like NATO, Brad Lendon notes that the Quad—a defense agreement between the US, Japan, India, and Australia—”is seen by some as a potential counterweight to growing Chinese influence and alleged aggression in Asia-Pacific.”

Operation Keen Sword will be followed up by a much larger training operation in the Indian Ocean next month involving all the Quad nations—a continued projection of power aimed at thwarting Chinese aggression and ambitions.

At the same time, less than a week after authorizing a $1.8 billion arms sale to Taiwan, the US Department of State notified Congress that it was requesting approval of another Foreign Military Sale to Taiwan—one that includes 100 Harpoon Coastal Defense Systems (HCDS), 400 RGM-84L-4 Harpoon Block II Surface-Launched Missiles, and 25 radar trucks.

These all-weather, active radar-guided missiles would be capable of targeting Chinese ships as far as half-way across the Taiwan Strait—making them a significant counter to the increasing prospects of a Chinese invasion of Taiwan.

Washington is sending a clear message to Beijing: If you invade Taiwan, we are going to make it as difficult as possible for you.

Regarding the Harpoon missile sale, the US State Department wrote, Taiwan “will be able to employ a highly reliable and effective system to counter or deter maritime aggressions, coastal blockades, and amphibious assaults.”

Again, let’s not dismiss the obvious (or put a tin-foil hat on the idea of potential armed conflict). Washington is clearly convinced that Chinese military aggression against Taiwan is a clear and present danger—up to and including an invasion.

To safeguard our national interests, China decided to take necessary measures and levy sanctions on U.S. companies such as Lockheed Martin, Boeing Defense, and Raytheon, and those individuals and companies who behaved badly in the process of the arms sales.”

However, details regarding what exactly those sanctions will look like were not disclosed.

Reuters aptly notes that Washington “has ramped up support for Taiwan through arms sales and visits by senior U.S officials, adding to tensions in relations between Beijing and Washington, already strained by disagreements over the South China Sea, Hong Kong, human rights and trade.”

While arguably necessary and prudent, we continue to argue that this arming of Taiwan by the United States is forcing the hands of Beijing. They are fully committed to regaining control over Taiwan and the longer they wait, the harder it will be. Thus, we anticipate that Jinping will need to move sooner rather than later—if he wants to ensure the highest likelihood of success.

All of this is occurring within a geopolitical framework that includes a dictatorial Communist leader with a bloodthirsty appetite for global domination—one predicated on a historical Chinese “Mandate of Heaven.”

First used to support the rule of the kings of the Zhou dynasty (1046–256 BCE) and legitimize their overthrow of the earlier Shang dynasty (1600–1069 BCE), Xi Jinping has reclaimed the “Mandate of Heaven”—both for China as a whole and for himself as its supreme ruler.

Xi Jinping has been talking increasingly about this tien seeyan notion, the notion that China has the mandate of heaven to rule the entire world, they not only have the right to do it, they have the obligation to do it… Decoupling is a good idea. China is configuring its military to kill Americans and we shouldn’t be enriching a hostile Chinese regime with our trade and our investments, decoupling is what we must do.”

As such, Jinping and the CCP are not going to backdown. It is a matter of cultural and historical pride, and they are committed to their plan to become the next global superpower and take over the world—through economic and military dominance.

US-China tensions are at an all-time high and the epicenter of the military dimension is China’s aggressive ambitions in the South and East China Seas—specifically in the Taiwan Strait and the Senkaku Islands.

Whether it’s the joint US-Japan military exercise Keen Sword, the island-landing rehearsals conducted by US-Japanese forces, or the sale of Harpoon missiles to Taiwan, the tensions continue to be ratcheted up at an exponential rate.

When you view these ongoing developments within the context of a Chinese regime that believes it has the “Mandate of Heaven” to dominate the world by any means necessary, then it is not hard to understand we are witnessing the prelude to war.

It’s coming folk… and it’s coming when we least expect it. It’s not a matter of if but when.

Situational awareness is important at a micro (tactical) level… but it’s also critical at a macro (strategic) level. Ensure that you and your family is adequately prepared—spiritually and physically—for tough times ahead as the ship sinks!

To learn more about the escalating threat posed by China, we highly recommend reading our articles: