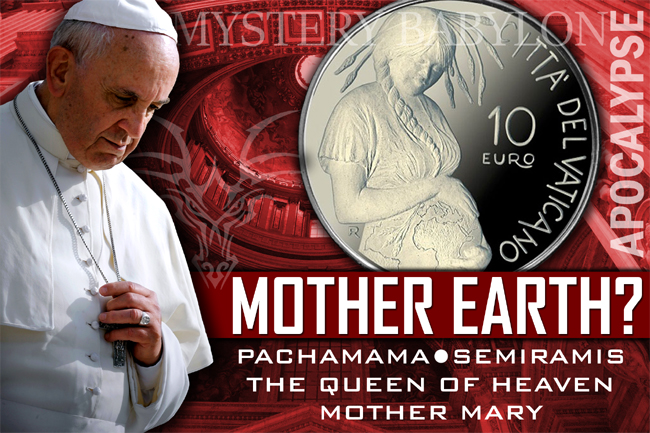 The world is hurtling down the tracks toward an inevitable apocalyptic reckoning. In order to understand the ultimate destination and the timing of our arrival, it is critical to maintain an informed understanding and awareness of (1) the world stage that is being prepared and (2) the actors who are playing their role upon that stage. The recent minting of a “Mother Earth” coin by Pope Francis and the Vatican is a perfect example—one that indicates the speed of the proverbial train on that track is exponentially accelerating!

On Monday, Pope Francis continued to expand his paganistic and Marxist influence within the Vatican and the broader Roman Catholic Church, approving the release of the Vatican’s newest minted coin—a 10-euro silver coin dedicated to Madre Terra (Mother Earth).

According to the Vatican, the image, designed for the World Earth Day by Bergamo-born sculptor and engraver Luigi Oldani, was intended to portray “a mother carrying the Earth, to which we owe care and love as if she were a daughter” and represents the Pope’s “commitment to take care of the planet.”

Now, maybe you’re not religious and are saying to yourself, “Who cares what the Pope does???”

Again, it’s about situational awareness—awareness that can and should guide and shape your short, mid, and long-term prepping. We are facing a global transformation and Pope Francis is a major player—one closely tied to globalist efforts to implement a global reset (as clearly elucidated by the World Economic Forum and United Nations) that will produce a globally-unified one-world government, economic system, and religious system.

Before we dive into the details of this news, my advice to our readers is simple: Ensure you are as prepared as possible. The ship is sinking and things—no matter how much the talking heads try to spin it—are not going to get better. Whether it’s the virus, social unrest, natural disasters, economic collapse, Middle East tension, or imminent conflict with China over Taiwan… this is a sell the rip and NOT a buy the dip global environment—one with a clear and pronounced downward trend.

Don’t be deceived—make sure you have adequate preps… including food!

The minting of the Mother Earth coin simply represents a doubling-down by Pope Francis and the Vatican on those two critical fronts: global governance (and specifically the Agenda 2030 framework) and an emerging one-world religious system.

First, this Vatican coin reflects the Pope’s commitment to a global Marxist transformation—one that will usher in a golden age of global green governance. Luigi Oldani (the coin’s designer) expressed that the image on the new Vatican coin embodied the global green deal movement, stating:

This is the extremist view represented by the UN’s Agenda 2030—a global new green deal.

The release of the coin falls on the heels of Pope Francis’ recent statements regarding the failure of capitalism and the need to unite the world under the global banner of the United Nations to save the planet.

Pope Francis recently declared that “the ‘magic theories’ of market capitalism have failed and that the world needs a new type of politics”–meaning, a global new world order under the direction of the UN, WEF, IMF, and the Vatican. A global government that can right the “injustices of the global economy and its destruction of the planet.”

Continuing to espouse his Marxist antichrist beliefs, Pope Francis went on to reject the concept of an absolute right to property for individuals, stressing instead the “social purpose” and common good that must come from sharing the Earth’s resources, stating:

The right to private property can only be considered a secondary natural right, derived from the principle of the universal destination of created goods.”

Forget the Constitution… the New World Order is coming.

Secondly, the new Vatican silver coin embodies the Pope’s pagan religious views—specifically, his overriding desire and insatiable drive to unite the world under a one-world religious system (led, of course, by him).

This is the “universal human fraternity” or “Fratelli Tutti” (Brothers All) Pope Francis loves to cite and represents both the rebirth and expansion of the false Babylonian religious system (see our articles Wokeness—Rebirth of Global Babylonian False Religious System and I Come In My Own Name: Is Pope Francis the False Prophet?).

The Pope has spearheaded the merging of Catholic and Muslim faiths, as well as declared that God has willed the “pluralism and diversity of religions.”

As such, it should come as no surprise that this coin not only represents “Mother Earth” but, more specifically, the Amazon fertility goddess Pachamama. Yes, the very pagan goddess that was embraced by Pope Francis and the Vatican during the 2019 Amazon Synod—to the outrage of many Catholics.

Pachamama is also known as “mother earth” or “mother nature” to the indigenous people of the Andes who worship this goddess. She is associated with fertility and the creative power to sustain life on earth. In fact, the four cosmological Quechua principles (Water, Earth, Sun, and Moon) claim Pachamama as their prime source.

Again, it should come as no surprise that the Roman Catholic Church synthesized this goddess into worship of the Virgin Mary during the Spanish colonization of the Americas. The Virgin Mary is a synthesis of many false deities—specifically, the “Queen of Heaven” Semiramis from the original false Babylonian religion. No surprise that God refers to Rome as “Mystery Babylon.”

Interestingly, Pachamama has a son-husband named Inti (the Incan sun god). This is nearly identical to the son of Semiramis (Tammuz), who was the reincarnation of her husband Nimrod (the sun god). You can see the export of the false Babylonian religious system throughout the ancient world—now being brought back together and fully restored under the Roman Catholic Church by the Pope under the worship of a highly synthesized Mary.

Regarding the release of this “Mother Earth” or “Goddess Pachamama” Vatican coin on the one-year anniversary of the Pope’s worship of the demonic Pachamama, English columnist Dcn. Nick Donnelly states:

This is defiant sacrilege against God. The Bible is clear that the worship of nature embodied in feminine idols is abhorrent to the holiness of God.”

As Jules Gomes aptly notes, Donnelly was “underscoring Sacred Scripture’s categorical repudiation of anthropomorphizing or divinizing of the earth, especially in the context of the Ancient Near Eastern worship of the fertility deity Baal.”

Pope Francis hosted the pagan ceremony (a.k.a. the Amazon Synod) on October 4, 2019—during which a Pachamama idol was blessed and both clergy and laypeople bowed to the pagan statue that was given a place of prominence in the center of the conference stage.

Furthermore, Pope Francis himself blessed a Pachamama statue at a tree-planting ritual in the Vatican gardens kicking off the Amazon Synod, processed with the idol into the synod hall, and several Pachamama statues were then displayed inside Santa Maria in Traspontina church near the Vatican.

Just to be crystal clear, Pope Francis unambiguously confirmed that the idol was in fact that of Pachamama.

In fact, Francis actually defended the demonic use of the Pachamama idol by the Vatican and the Roman Catholic Church, asserting that people should “not be quick to describe as superstition or paganism certain religious practices that arise spontaneously from the life of peoples.”

Apparently, Pope Francis isn’t concerned with the fact that God abhors such behavior and Scripture forbids it—the entire Old Testament testifies to this!

He added, “Myth charged with spiritual meaning can be used to advantage and not always considered a pagan error.”

Huh? This is the embodiment of “the ends justify the means” reasoning—a Marxist and Satanic (not Biblical) philosophy.

God NEVER says that such behavior is justified. Sin is always sin—there is no such thing as “good”, “beneficial,” or “acceptable” sin. It all leads to pain, death, and destruction.

To learn more about Marxism and the “wokeness” being peddled by the Pope, I encourage you to read our articles Marxism Exposed: Prepare for the Next American Revolution and Wokeness—Rebirth of Global Babylonian False Religious System.

But this by no means a Catholic Church outlier. Franciscans International sent out a Christmas card last year (predicated on the Pope’s call for the church to embrace pagan idols and his own embrace of the Amazon synod) that included an image with the Virgin Mary facing Pachamama:

I just don’t understand why you see it as a sacrilege to bring Mary together with the pagan symbol for mother earth.”

The fact that you don’t see a problem with it may just be the problem Markus??? Just saying.

Again, it is worth pointing out that Franciscans International says on its website that it enjoys consultative status at the United Nations—a fact it proudly includes as a tag line with its logo.

Following the release of his idolatrous Pachamama coin, Pope Francis will participate in an ecumenical prayer service and an interreligious ceremony for peace in Rome next week at the Vatican. It is part of his international Prayer for Peace initiative and the theme is “No One Is Saved Alone—Peace and Fraternity”.

The Catholic News Agency reports that, in addition to Pope Francis, other participants will include Ecumenical Patriarch Bartholomew I of Constantinople; Haim Korsia, Chief Rabbi of France; Mohamed Abdelsalam Abdellatif, the Muslim General Secretary of the Higher Committee of Human Fraternity; and Buddhist Shoten Minegishi.

The doors to the Ark are about to be closed… please make sure you are onboard!!!

And while you’re at it… you might want to triple your prepping efforts while we await our blessed hope—the Rapture!

While the minting of a Mother Earth, Mother Nature, or Pachamama Vatican coin may seem insignificant, it is a critical piece of information—one that provides significant intel to those seeking to acquire situational awareness in a rapidly transforming world.

It serves as yet another in a long series of signs that clearly indicates Pope Francis and the Vatican are enthusiastically pushing for the unification of the world under a one-world government and religious system—under the Marxist banner of social and environmental justice.

History is horrifically clear that all previous attempts to create a global church-state union have ended badly for all. Do you really think things will end differently this time?

Before you answer, I recommend you read our article Catholic US Supreme Court—Pope & Vatican Poised to Usurp Constitution?

Folks, the train is barreling down the tracks at an ever-increasing speed… and it is nearing its destination.

The New World Order is on our proverbial doorstep… and it won’t be pretty.

I encourage you to ensure that you are spiritually and physically prepared—don’t be deceived or lulled into complacency! Keep prepping!