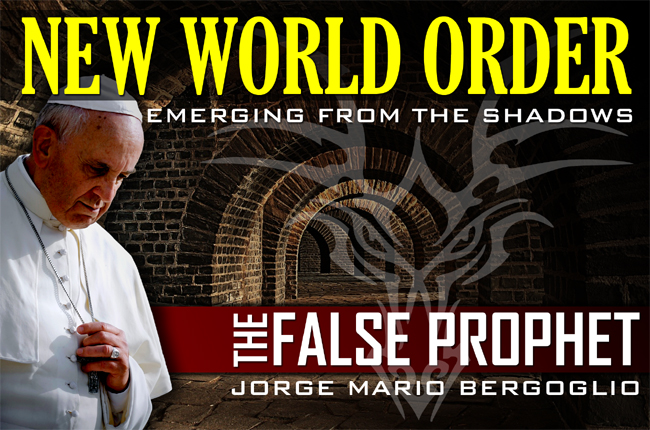 The Babylonian false religious system that is Roman Catholicism continues to usher in the New World Order under the carefully orchestrated leadership of False Prophet Pope Francis and the Vatican machine. Things are unfolding exactly as God declared they would in Scripture… and, make no mistake about it, the result will be apocalyptic for the world.

The World Meeting of Popular Movements (WMPM)—a pipeline (or sewer system) of Marxist transformation—recently took place in Rosario, Argentina, where it brought together radical grassroots organizations from five continents under the banner of the Roman Catholic Church.

The WMPM is an initiative of Pope Francis himself and he is obviously a staunch supporter of the event—organized by the Vatican—that espouses his demonic platform of Fratelli tutti (a.k.a. universal fraternity). In fact, two of the Pope’s most trusted advisors took part in the meeting—including Cardinal Peter Turkson, Prefect of the Vatican Dicastery for the Promotion of Integral Human Development, who personally addressed the meeting.

In his address on behalf of Pope Francis, Turkson attacked what he labelled as “inequalities, lack of access to health, [and] cruel economic systems,” adding that Pope Francis’ Fratelli tutti represents the proper and only solution to the ills of capitalism and democracy. In truth, it should really be referred to as Satan’s final solution.

The World Meeting of Popular Movements has gathered several times, including its inaugural meeting in Rome in 2014. Pope Francis himself has participated in several of them—two in Rome and one in Santa Cruz de la Sierra, Bolivia.

The participants of this meeting issued a seven-page document, entitled “The Economy of Francis,” that will be presented at—you guessed it—an upcoming event on the economy hosted by one Pope Jorge Mario Bergoglio (the False Prophet???) at the Vatican.

We are now witnessing the bold and rapid unveiling of the long-anticipated New World Order—a global totalitarian order that will ultimately fall under the control of a coming world leader (the Antichrist) and “Francis” (the False Prophet).

I don’t know about you, but I don’t want to experience a totalitarian Marxist “Economy of Francis”… but that is exactly what is unfolding before our very eyes—and unfolding at an ever-increasing pace.

The WMPM’s document begins by stating, “We believe that the socio-environmental crisis cannot be overcome within the framework of the globally hegemonic capitalist system. Our intention here is to provide elements for imagining an alternative system.”

We know that none of what we propose is possible with the current balance of power that is determining relations between nations and within them… We have confidence in the ability of the peoples to resist injustice and transform reality. We therefore take on the task of building popular power so that workers and poor people become protagonists of the change that the world needs, because, as [Pope] Francis has stated, ‘In your hands, in our hands, lies the future of the humanity‘.”

This is nothing but a reiteration of the great lie of Satan—the same lie he cunningly sold to Adam and Eve in the Garden… that we can be our own gods.

It is the humanist obsession… the same “let us” lie that was embodied in the false Babylonian religious system (see Genesis 11:1-4).

During the meeting, members of the popular movements even passionately referred to Pope Francis as the “shepherd of peoples,” whose “revolutionary preaching” is summoning and calling the people to “lead the process of change that the whole of humanity needs.”

Folks, if that doesn’t cause the hairs on the back of your neck to stand up, there’s something wrong with you. This is the spirit of antichrist and the kind of cult-like authority by the False Prophet that the Bible has clearly warned us about.

Among their proposals, the members of the World Meeting of Popular Movements call for:

Understand, this list only represents a few of their recommendations and I encourage you to read the entire 7-page document to really understand the scope of Marxist transformation they are seeking.

In terms of tax policy, they call for a global tax policy aimed at “all industries that cause damage to the physical or mental health of the population”—to be defined, of course, by Pope Francis and the new one-world government.

In terms of production and the market place, they call for a “plan, at the international level, for the production and fair distribution of all that contributes to the people’s physical, biological and spiritual needs, in accord with a new ethical pattern of life, well-being, and security, and without commercializing human needs.”

In other words, as Pope Francis states in his Fatelli tutti, “The right to private property is always accompanied by the primary and prior principle of the subordination of all private property to the universal destination of the earth’s goods, and thus the right of all to their use.”

In terms of a one-world currency, they call for a global UN currency so that the “dollar and the euro will no longer be used in international transactions.”

The People’s Agrarian Reform calls for the redistribution of land to anyone who wants it and is willing to work it—with strict limits on the size of agricultural property and the prioritization of the production of healthy food (a.k.a. the food police).

You can’t make this stuff up folks!

This is what the radical left, globalists, and shadow puppet masters want—a New World Order in which the control everything (viz., food, energy, production, identity, property, and currency). And, it will happen… and happen quickly.

To learn more about Pope Francis (False Prophet) and Vatican’s role in the coming New World Order, we encourage you to read our articles:

God’s Word foretold of all this happening—to a tee. And if the Bible has been 100% accurate so far… should we not expect those things still remaining to be fulfilled will also come to pass exactly as God declared?

Wake up folks! Do not be deceived!

The New World Order is coming like a runaway freight train rambling down the proverbial track. The global reset is about to be implemented—a reset that will suddenly produce a one-world government, one-world economy (and currency), and one-world religion… all under the totalitarian control of the coming Antichrist and False Prophet (Pope).

The good news is that God has provided a way out (a blessed hope) to all who place their faith in His Son Jesus Christ—the Rapture (see Titus 2:13 and 1 Thessalonians 4:13-18).

There is precious little time left my friend—today needs to be your day of salvation!

Things are unfolding at breakneck speed now. It’s time to accept salvation by grace alone through faith alone in Christ alone… before it’s too late and you miss Flight #777 to heaven!

Once you have taken care of your spiritual preparation by trusting in the shed blood of Christ, it’s then critical to ensure you are as physically prepared as possible—things could get much worse very quickly in whatever time remains before the Rapture!

And, even if we are raptured quickly and don’t end up needing those preps, they will be a tremendous blessing for those left behind to try and survive the New World Order during the apocalyptic seven-year tribulation period. It’s a win-win proposition!

We’re not here to be fear mongers. God does not desire for you to have a spirit of fear—fear is not from God but from Satan.

Rather, we are simply watchmen on the wall… trying to warn our readers about the reality of what is happening, what is to come, and the good news regarding God’s perfect and loving solution for you.

Whether you “like” the message or not, that is of no concern to us. We have done—and will continue to do—our job as servants of Christ… we have sounded the alarm for you, declared the truth to you, and pointed you to the one and only answer—Jesus Christ.

What you chose to do with that information is entirely up to you!