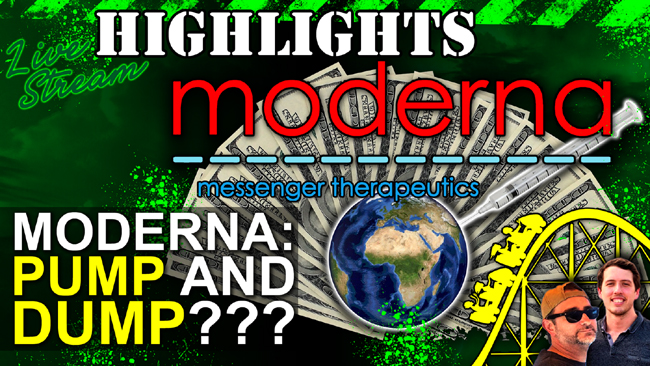 Moderna recently announced “great” news regarding its developmental mRNA vaccine (mRNA-1273) for the Covid-19 virus. That phase-I press release triggered an expected surge in euphoria and expectations–causing the company’s stock price to surge.

However, the company released no actual data and experts have collectively cautioned that very little–if any–value can be derived from the carefully wordsmithed press release (aka marketing message).

Additionally, the National Institute of Allergy and Infectious Diseases (NIAID), which loves to publicize its work, has been curiously silent regarding the hidden phase-1 trial data… data that the NIAID was a close partner with Moderna in producing.

Furthermore, the company immediately announced a large stock offering–with the price of that offering conveniently locked in at the peak of the news-driven market surge.

Finally, we find that Maderna’s CEO, Stéphane Bancel (now officially a billionare thanks to the surge in the company’s stock price), and several other entities he controls are aggressively and consistently selling (dumping?) shares in the company–as well as President Hoge Stephan, CFO Bancel Stephane, CTO Andres Juan, and other corporate officers.

In this video, we discuss the growing concerns regarding Moderna and its prototype coronavirus vaccine. Are investors and the public being played yet again by a pharmaceutical? To borrow a line from Shakespeare’s Hamlet, is “Something rotten in the state of Denmark???”

Here is a listing of the insider stock transactions at Moderna for just the past 60 days. Several things jump out: (1) it is a very high amount of transactions, (2) it represents consistent and sizable liquidations, and (3) they are all SELLS.