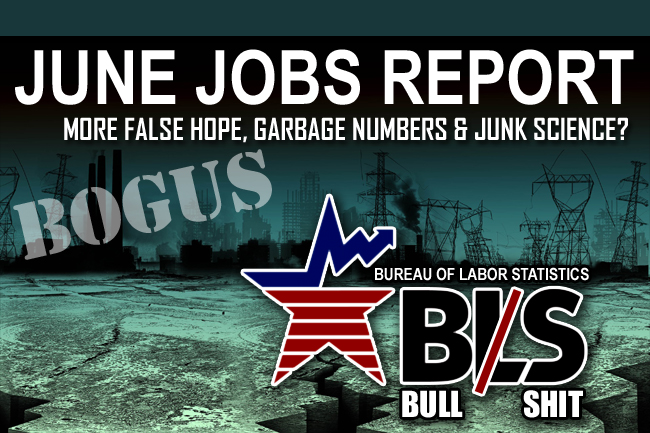 The monthly Jobs Report (Employment Situation Summary) published by the U.S. Bureau of Labor Statistics (BLS) is—and always has been—a completely bogus report. Everybody knows this. It is a highly manipulated opinion—heavily biased by political persuasion—that is used to paint a picture of the labor market. Again, it is an opinion piece, constructed by manipulated data and presuppositions.

We spent a great deal of time analyzing the May jobs report (read the article), pointing out all the flaws and manipulations. As such, we don’t want to spend as much time with the June report. However, given (once again) the unbelievably rosy picture presented by the June report, we did want to address it for our readers.

The former is a politically-biased hack job, predicated on a limited number of subjective and highly manipulated “surveys” of households and employers—conducted at the beginning of each month. The latter is based on hard data—actual filed claims. As such, we give much more weight to the weekly jobless claims reports and their trend.

So, let’s get into this and see what June really looked like…

Furthermore, the Household Survey Data “showed” that the unemployment rate declined by 2.2 percentage points to 11.1 percent in June, and the number of unemployed persons fell by 3.2 million to 17.8 million.

The report clearly notes that this does NOT include 8.2 million Americans “not in the labor force who currently want a job.”

That would put the “actual” unemployment number at 26 million Americans—according to the BLS survey data.

Furthermore, we still have the problem of furloughed workers being incorrectly classified—a “problem” that has been ongoing for months. To adjust for this known error, the BLS concedes that you would have to add a full percentage point to their number—meaning, the unemployment rate was 12.1%, not 11.1%.

They note, “BLS and Census Bureau analyses of the underlying data suggest that this group still included some workers affected by the pandemic who should have been classified as unemployed on temporary layoff.”

“If the workers who were recorded as employed but absent from work due to ‘other reasons’ (over and above the number absent for other reasons in a typical June) had been classified as unemployed on temporary layoff, the overall unemployment rate would have been about 1 percentage point higher than reported (on a not seasonally adjusted basis).”

And, the BLS has continued to manipulate the net birth-death rate of small business to materially pad the numbers. We discussed this in detail for the May report, but we’ll touch on it again at the end of this article. But for now, let’s take a look at the conflicting data being published by the DOL using jobless claims…

According to the Unemployment Insurance Weekly Claims report released by the Department of Labor (DOL) on Thursday, July 2, for the week ending June 27, the seasonally adjusted initial claims was 1,427,000—a decrease of only 55,000 from the previous week’s revised level (which was revised up).

The 4-week moving average was 1,503,750, and the seasonally adjusted insured unemployment rate was 13.2 percent for the week ending June 20—unchanged from the previous week’s revised rate.

Comparison of the Jobs & Unemployment Reports

The DOL hard data paints a very different picture than what is presented by the BLS???

That number actually ties to the BLS job report numbers… when you adjust for the misclassified people.

So, we know that at the very least, the BLS report is intentionally deceptive—it did not adjust for this actual flaw in their numbers (just a mention of it buried in the report). They know that headlines matter and nobody reads the fine print.

However, this only reflects those actually receiving unemployment assistance!

We know that there are at least another 8.2 million unemployed Americans not included in that number—which takes the total unemployment to 27.5 million Americans.

Furthermore, the actual claims data shows that companies are still consistently laying off 1.5 million Americans a week—and the overall unemployment number has stabilized.

This means thinks aren’t getting worse… but they are no longer getting any better either. We have stalled in our reboot—far short of the supposed V-shaped recovery.

Finally, this data was from the period of greatest “re-opening” efforts. This is highly concerning because (1) most businesses have re-opened and re-called as many workers as possible at this point, (2) we are now beginning to tighten interventions (move the other direction) due to the out-of-control spread of the virus, (3) consumer demand remains considerably dampened and capped at this point, (4) expectations on the vaccine front have been revised significantly downward as of late, and (5) we will be heading into flu season before you know it.

Flu season is a concern for a number of reasons. First, it opens the door for a second wave of Covid. Second, folks can get both the flu and Covid at the same time—the effects of which are unknown. Third, any short-term immunity acquired by millions of “recovered” Covid patients will be gone—exposing them to possible re-infection (the impact of which could be worse the second time).

Thus, moving forward, we can expect unemployment to remain at the current levels—if it doesn’t actually get worse. In other words, any perceived recovery has peaked.

This is a very different reality from what the bogus jobs report continues to advance.

That propaganda (along with the Fed propping up the financial markets) can only hold up for so long. The divergence it is causing will have to be resolved. There’s no free lunch and we can only diverge from reality for so long.

If this is a façade the Trump administration wants to perpetuate until the election, they can do that. However, the world is in for a very unpleasant awakening in November and December—when reality will be released to rear its ugly head.

Finally, the American people are growing tired of being misled, lied to, and manipulated by their government and experts. The longer this continues to occur, the higher the cost will be in terms of lost confidence, frustration, anger, and unrest. It is NOT a good thing for our nation. Honesty, transparency, and truth is always a better way to go—even if it is distressing in the short run.

As we mentioned above, the BLS continues to manipulate the net death-birth rate in order to pencil a desired number.

Unbelievably, the June jobs report contends that health care employment increased by 358,000 over the month, with gains in offices of dentists of +190,000. If you remember, we pointed this out in May, when they claimed dentist offices added an absurd +245,000 jobs???

That’s 335,000 dental office jobs added in two months! Remember as well, we showed that there are (according to data from the ADA) only around 90,000 dentist offices in the entire country—meaning, we’ve “added” nearly four new jobs in every single dentist office around the country… in two months???

Do you really think that’s reasonable? Or, was it just sneaky way to pad the numbers? You be the judge.

(and they did this in a multitude of industries and subsectors)

Again, regarding the methodological changes to the net birth-death model, the BLS noted:

We saw how badly this change skewed the numbers in May… how about June?

The “adjustment” to the forecast model resulted in the bogus (created out of thin air) addition of 222,000 small business jobs in June.

Given everything going on, do you really think folks have started that many new small businesses in the past two months?

In effect, the BLS has arbitrarily decided that not only are we completely back to normal—but we are actually even better than we were pre-Covid? We now have more small businesses—we haven’t just witnessed a V-shaped recovery… we’ve actually seen an economic expansion!

Everyone knows the BLS jobs report is bogus. It is—and always has been—politically biased smoke and mirrors.

You need to do your own research and formulate your own conclusions using critical thinking skills. However, it our position that the economy—both in terms of employment and output—has been materially impacted by the pandemic. Furthermore, any recovery has been extremely slow and stunted.

Given the backdrop of economic inequality and civil unrest, the narrative being peddled by the Right is as concerning as it is dangerous. Don’t drink the Kool-Aid or fall for the political hype. The economy is struggling. We are in a serious and prolonged recession—one with no end in sight and the very real potential that it will degrade into a depression.

Our advice, plain and simple, is to trust your gut (intuition) and continue prepping. Something isn’t right and we all know and feel it. We can smell a rat… or, to borrow a line from Shakespeare’s Hamlet, “Something is rotten in the state of Denmark.”

As always, hope for the best, plan for the worst, and—in all things—pray!