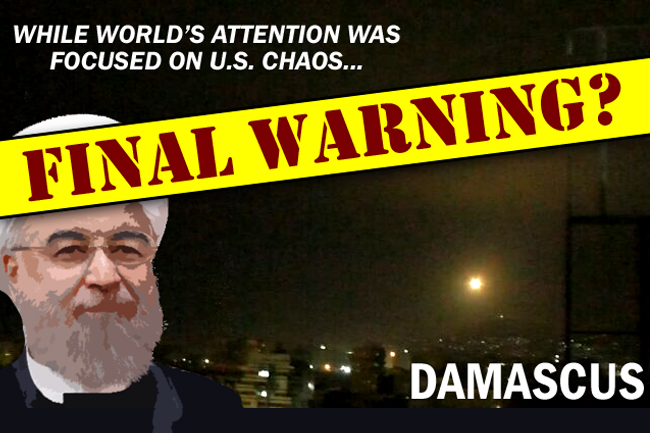 At the very moment the world’s attention was focused on the U.S. Capital, Israeli airstrikes were once again pounding areas around Damascus, Syria. The stage has been set and this could be a final warning for the fulfilment of biblical prophecy regarding the destruction of the city of Damascus (Isaiah 17:1). It’s time to get your spiritual house in order—what additional signs could you possible be waiting for or need to see?

Israeli Airstrikes Continue to Pound the City of Damascus

Explosions were heard in the skies over Damascus Wednesday night (afternoon/evening in the US) as Israeli airstrikes were launched on a number of sites around Damascus—targeting the area of el-Kisweh, south of the capital, and around the town of al-Dimas, west of Damascus.

The Israeli enemy carried out an air attack by means of a barrage of missiles from the direction of the occupied Syrian Golan on some targets in the southern region.”

The attack came eight days after a round of airstrikes on an Iranian target in western Syria and a Syrian military air defense battery—marking the third alleged Israeli airstrike reported in Syria in the past ten days as tensions and military operations continue to escalate.

The missiles targeted bases used by Iran’s Islamic Revolutionary Guard Corps and Hezbollah, with both areas around Damascus having been used as bases of operation for Iranian forces in Syria, as well as Iranian-backed militias.

The strikes were reportedly launched from the Golan Heights and opposition-affiliated Halab Today TV reported that more than five strikes targeted sites near the First Division of the Syrian military in the Al-Kiswah area, south of Damascus.

The IDF airstrikes are part of a larger strategy to counter moves by Iran to establish a permanent military presence in the country and efforts to transport advanced, game-changing weapons to terrorist groups in the region, principally Hezbollah.

And last week, Israeli airstrikes targeted Al-Zabadani—believed to be part of a major smuggling route for weapons sent through Syria to Hezbollah in Lebanon.

God’s focus is always on Israel and this is most certainly true when it comes to His prophetic plan for these last days. As such, it is critical to keep your eye on the ball—namely, the apple of God’s eye (Israel).

Do not allow sleights of hand and misdirection to cause you to be deceived—we are on the very doorstep of apocalyptic tribulation period foretold to us by God in His Word.

More than 2,500 years ago, God declared through the prophet Isaiah:

The burden of Damascus. Behold, Damascus is taken away from being a city, and it shall be a ruinous heap… And behold at eveningtide trouble; and before the morning he is not.” (Isaiah 17:1, 14)

The stage has been set and we are about to see this prophecy fulfilled before our very eyes—Damascus will be utterly destroyed in a night.

When you see it happen, know that God specifically told us it would happen—He has told us the end from the beginning.

Remember the former things of old, for I am God, and there is no other; I am God, and there is none like Me, declaring the end from the beginning, and from ancient times things that are not yet done, saying, ‘My counsel shall stand, and I will do all My pleasure,’ calling a bird of prey from the east, the man who executes My counsel, from a far country. Indeed, I have spoken it; I will also bring it to pass. I have purposed it; I will also do it.” (Isaiah 46:9-11)

When you see it happen, recognize that all the bible speaks of regarding that which will happen in the last days is literal and 100% accurate.

With Russia, Turkey and Iran now all massively engaged in operations around Damascus, it is only a matter of time before this powder keg explodes—regardless of what causes the destruction of the city (and the potential triggers are numerous).

Furthermore, when this prophecy comes to pass, it will likely trigger the war of Gog and Magog as well.

To learn more about this highly volatile situation, we encourage you to read our articles:

While it is an exciting time to be alive (we have a front-row seat to watch the unfolding culmination of God’s prophetic plan), it is also a final warning that you need to place your faith and trust in Christ right now!

At any moment, Christ is going to rapture true believers out of this world—paving the way for God to resume His redemptive work with Israel and pour out His wrath on a wicked and debased world.

Again, the fact that we are seeing every conceivable sign that the time is here and the birth pangs Jesus spoke about are signaling we are in the final moments of labor clearly indicate the rapture could happen at any moment—and you do NOT want to be left behind to face the horrific seven-year tribulation period!

Now, we don’t know the day or time it will happen… we just know it is incredibly close and could literally happen at any moment. The great deception to explain it has already been unveiled and implemented (see our articles Alien Deception & Great Awakening—Expect More UFO Disclosures and The Great Alien Deception—Is World Being Conditioned for Rapture?)

As such, you need to be taking advantage of any opportunities you have to finalize your physical preps to ensure you can successfully “occupy” until Christ comes to take us home—things are only going to get worse… much worse.

Do not buy the lie. Do not be deceived. We are NOT on the verge of a great evolution or ascension of humanity to a higher level nor a glorious brave new world.

We are on the threshold of hell on earth.

We highly recommend reading our article We’re Never Going Back to Pre-Covid World—This Is How It Ends.

However, far more important than anything else, you need to ensure you are spiritual prepared—that you are on the Ark that is Jesus Christ (or Titus 213 Airlines’ Flight 777 if you prefer).

The doors are about to be unexpectedly sealed shut by God… and we all know what happened in the days of Noah after God shut the doors to that ark!

We encourage you to read our articles The Ship IS Sinking… What Are YOU Going to Do as It Goes Under? and Are You Prepping to Survive or to Escape the Coming Fiery Furnace?

Today is your day of salvation—a salvation that comes but one way: by grace alone, through faith alone, in Christ alone!