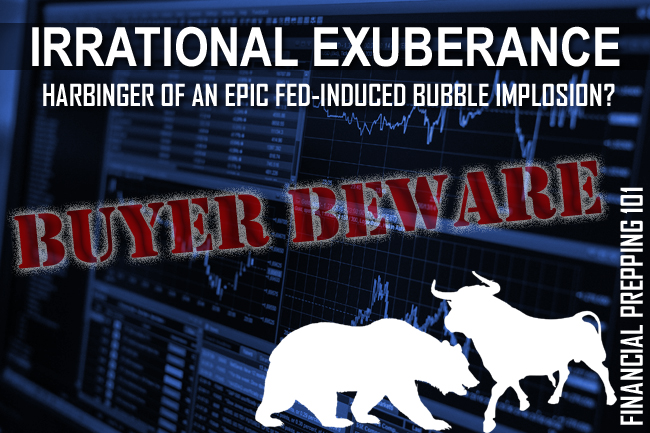 As the Nasdaq screams to new all-time highs, the bull market is back… or so the new story goes. Jim Cramer recently asserted on CNBC (in the wake of the Bogus Job Report surge) that “people feel safe to buy stocks” now. Is that really the case? And, if so, is it a good thing? Or, is the current wave of irrational exuberance a harbinger of an inescapable Fed-induced bubble implosion in the markets?

In fairness to Cramer, his point was that the apparent market exuberance and lack of any sellers is a deeply troubling development—one that leaves him concerned that the market rally has gotten way to far out in front of its skis (viz., the supposed economic recovery).

Really Jim? You just noticed this?

There has been no economic recovery—outside of a handful of big players in the online and big-box spaces (e.g., Amazon, Walmart, and Costco). The market’s V-shaped recovery is entirely decoupled from the underlying fundamentals and a macroeconomy that is reeling (collapsing?) after taking massive body blows from the response to the pandemic and the growing civil unrest.

If you’ve spent any length of time watching Cramer, you know that the man is literally all over the place. He goes from one extreme (everything is great, the economy is back, it’s full speed ahead, etc.) to the other (the sky is falling, and the market has lost its collective mind)—all from one show to the next.

He does this to cover his bases. No matter what happens (and he has no real clue), he can point back to some comment that “proves” he was right. I rarely watch him because I can’t handle the whiplash he dishes out on a nightly basis.

However, I think there is some truth to be found in what he had to say. Here are five major problems I see with the markets today…

The number one defense that is advanced to support the market’s insane bounce-back (recovery) is that it is “forward” looking. In other words, yes, the economy is bad… but market pricing reflects a future state, when everything will be back to normal.

If that’s the case, then there would never be crashes or corrections—markets would just look further down the road and beyond the short-run fundamental issues and weaknesses.

Furthermore, since when have the markets had a long-term perspective on fundamentals?

It’s been decades! The time horizon of institutional investors (who represent the bulk of the markets) has been shrinking at breakneck speed. Where it used to look 5-10 years down the road, it then began looking 3-5 years, and then 1-3 years, and, now, rarely looks beyond a year in the future.

It is the institutional investors themselves that are crying about this—it has impacted their ability to invest via any strategy that is exposed to volatility and requires time to carry out.

They argue that retail investors have become fickly and judge them based on the performance they can deliver over the next year—not over the long term. If investors don’t like those results (regardless of how great the results may be over a longer period), they just pull their money to chase the next great fund or fund manager that has outperformed recently.

No, claims that the markets have overlooked short-run fundamentals because they are looking further out are completely baseless.

Despite the lack of fundamental support for current pricing (just look at the historically high PEs and Q ratio, as well as collapsing corporate earnings), the financial media—including Mr. Cramer—continues to advocate for retail investors to jump in.

Like the radical left inciting rioting, these market windbags are inciting the little guy to poor their money into the markets.

It’s akin to a doctor telling an obese patient to keep eating more. It would be negligent for a doctor to do that… and it’s equally negligent for the financial “experts” to do the same when it comes to people’s money and financial future.

Harbinger of Collapse #3: There are Sellers—But the Fed Is a Bigger Buyer

Cramer asked, “Where are the sellers?” Answering his own rhetorical question by noting, “It’s almost as if people decided Covid is over. It’s a ‘V-shaped’ rally, and you better get on board.”

He is completely missing (or disingenuously ignoring) what’s really going on. There are sellers—plenty of them. However, the Fed is an even bigger buyer—larger than the aggregate of all sellers.

This leads to a huge problem: It eliminates legitimate price discovery.

In other words, it creates a bubble—one created by the Fed.

The first two problems are compounded by the fact that retail investors (1) are typically less market savvy/fluent and (2) invest emotionally.

They see the market soaring and listen to the talking heads, oblivious to the behind-the-scenes impact of the Fed. Suddenly, they are overcome by FOMO and start pouring their limited capital back into the rising bubble.

They big boys are deleveraging and reducing their risk—thanks to the buying action of the Fed and retail investors.

Cramer acknowledged the foolishness of this, exclaiming, “The rallies are crazy!” He was specifically referring to the beaten-down banks and airlines—though the point could be easily extrapolated to large swaths of the market. “Those runs are absurd,” he added, pointing out that not too long ago buyers for banks, airlines, and other economically sensitive stocks were nowhere to be found.

He summed it up perfectly: “Either people were really wrong selling, including Warren Buffett with the airlines, or it’s fanciful.”

I think the answer is patently obvious: it’s fanciful.

Buffett did not liquidate Berkshire Hathaway’s $4 billion stake in the airlines (including United, American, Southwest, and Delta) for nothing. This is a man who bleeds “buy and hold.” However, he equally understands fundamentals and investing unemotionally.

Again, the big boys are exiting—deleveraging their portfolios, reducing risk, and piling up cash to invest during more opportune times (likely very soon).

On the other hand, retail investors (as they always do) are chasing the herd as it blindly stampedes toward the cliff—oblivious to the fact that they are being played and will pay the price via a painful plunge off it.

Harbinger of Collapse #5: What Choice Do Investors Really Have?

Cramer questioned whether investors are jumping into a market “being pumped up” by the Fed, feeling they have no choice because they missed the early part of the rally.

That’s the problem with bubbles—they remove all the guidance and signals needed to make wise investing decisions.

Sadly, he’s right. Investors—especially the little retail guys—have no choice but to follow the bubble up if they want to invest for their future. I mean what else are you going to do… earn miniscule interest via treasuries or savings accounts? (Yup, you can thank the Fed for that as well—artificially lowing interest rates to near zero!)

The problem is that no one knows when the market will turn, the bubble will pop, and the elevator ride down will happen. But, rest assured, it will.

The money was made by getting in at the bottom—not now when valuations are in nose-bleed territory!

The risk-reward equation has completely reversed. It’s the worst time to get in… and yet, it is precisely the time when retail investors begin to feel safe venturing back into the water. And the elites depend on that behavior!

You can’t fight the Fed. But eventually, even the Fed will have to back off. We are already seeing signs that they are decelerating their quantitative easing efforts. And we all know what that means… pop goes the bubble!

You do not want your entire wealth to be tied-up in “paper” assets (viz., stocks).

Second, hold what you’ve got. Hopefully, you started putting capital to work at the bottom… when there was blood in the streets, and everybody was running for the exits in heart-stopping fear.

If you did, you have a much better cost basis and should hold what you’ve got.

Third, understand and embrace a long-term investing mindset. If you are invested for the next 10, 20, or more years, you will be just fine. I highly encourage you to visit my financial education site Wicked.Capital—where I have written numerous articles on long-term investing and embracing the proper mindset. Investing success is all about process and mindset. Skimp on either and you are destined for disaster.

I recommend starting with these:

Fourth, always utilize a cost-averaging approach to investing. It’s nearly impossible to call market bottoms and tops. Stop trying to do it—it is the path to BIG losses. Instead, consistently invest over time. By doing so, you will average the peaks and valleys and do just fine. Don’t try to play the roulette wheel and put everything down on “red 7” at once!

If you have been utilizing this strategy, keep doing what you’re doing—that’s the whole point of it.

However, if you haven’t, then I would caution you about jumping in the markets now. I’m not saying don’t—but please understand the horrible risk-reward setup that exists right now. And never—and I mean never—invest with money you can’t afford to give away or may need in the short-term.

The bubble will pop, and the market will crash. We are in a bear market (based on the real economy). At some point, the music will stop and the divergence between the fantasy market and economic reality will correct itself.

However, the current and absurd melt-up can continue much longer than people think—powered by a Fed with an unlimited credit line. The collapse is imminent—meaning the market bubble is ready to and will ultimately burst, but it may not happen immediately. That’s what makes it so tricky—and trying to predict and time that move is a fool’s errand.

What investors need to do is embrace that knowledge, manage their risk, and invest very cautiously. Be methodical, logical and rational—not emotional!