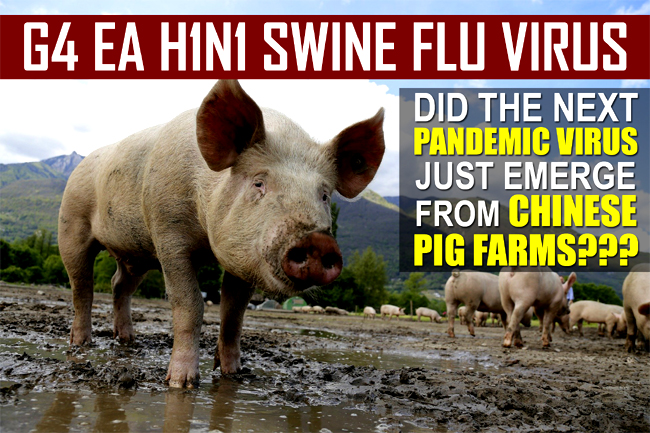 A new swine flu virus (a strain of influenza), identified as G4 EA N1H1, has emerged in Chinese pig farms. The novel virus was recently confirmed by 23 Chinese researchers in a June 29 paper published in the Proceedings of the National Academy of Sciences (PNAS). Its prevalence among Chinese pigs is soaring and the strain could represent the next virus to trigger a global pandemic. What do we know about it and should we be worried?

The Chinese paper reports that researchers had identified the new virus through the analysis of nearly 30,000 nasal swabs from pigs—considered “important hosts or ‘mixing vessels’ for the generation of pandemic influenza viruses”—in slaughterhouses in 10 provinces in China collected between 2011 and 2018.

From these samples, they found nearly 180 different strains of flu virus infecting pigs.

However, they noted that many of these viruses didn’t circulate for long. They showed up one year and disappeared the next. But G4 EA H1N1 kept showing up, and has been the predominant flu strain in pigs since 2016. In fact, they found that the infection rate has been increasing at an alarming rate

Their research, using that same data, indicates that the G4 swine flu strain includes DNA from the 2009 H1N1 strain—responsible for the pandemic that year (which inflected 60.8 million Americans and killed between 150 and 575 thousand people around the globe), as well as the Spanish Flu.

What Threat Does the G4 EA H1N1 Virus Pose to the World?

Experts have noted that this new Chinese swine variant has “all the essential hallmarks of a candidate pandemic virus.”

Furthermore, they warn that there is no natural immunity to H1N1 or this new virus. Though, this should not be surprising to our readers as we only maintain flu immunity for very short periods of time—it is not a lasting immunity (hence people get flu shots for the season).

Contrary to another apparent misstatement by Dr. Anthony Fauci, the virus has already made the jump to humans, with several active cases confirmed. Furthermore, serological testing has found that as many as 10% of Chinese having had exposure to infected pigs tested positive for G4 antibodies.

Specifically, the paper reported that serological surveillance of 338 people in 10 Chinese provinces who worked with swine between January 2011 and April 2018 showed that 10.4% tested positive for the G4 EA H1H1 virus. Among workers between ages 18 and 35, the infection rate was nearly double, at 20.5%.

However, it does not appear to have made the jump from human to human. Like most novel viruses, they struggle during the early stage in a new host—needing time to adapt to new structures and biological mechanisms. In this case, it appears that process has been going on for at least nine years.

It is worth noting that the exception to this (of course) is Covid-19, which made a miraculous leap into humans with precision, robustness, and unfathomable efficacy (displaying the immediate ability to both explosively infect and attack the human body, as well as rapidly transmit from human to human, and many other animals, with ease)—more reason to support the emerging consensus view that SARS-Cov-2 was not a natural leap but, rather, a lab leak of a time-series, gain-of-function experiment.

Despite the fact that researches have so far not been able to confirm human-to-human transmission, the Chinese researchers noted, “G4 viruses bind to human-type receptors, produce much higher progeny virus in human epithelial cells and show efficient infectivity and aerosol transmission in ferrets.”

Stated differently, “Tests in lab dishes showed the virus can bind to receptors on human cells and replicate efficiently in human airway cells.”

Experts warn that this level of infectivity makes it much more likely that the virus will continue to adapt in humans, making it likely only a matter of time before G4 EA H1N1 makes that leap as well. If (when) it does, it has the potential to become the next global pandemic threat.

However, there is some good news to report. First, N1H1 is typically not a highly virulent virus. Second, as of yet, the symptoms have not been severe in those infected. Third, according to Sumit Chanda, Ph.D., director of the immunity and pathogenesis program at Sanford Burnham Prebys Medical Discovery Institute, “Even if a pandemic ensues, it won’t be like the COVID-19 experience. We have good drugs for flu, [such as] Oxivir® and Tamiflu®… and they should work on this new virus.”

Thus, we feel the novel G4 EA N1H1 swine flu virus is something to monitor… but not something to be overly concerned about. And that’s good news considering we already have our hands full with Covid-19!