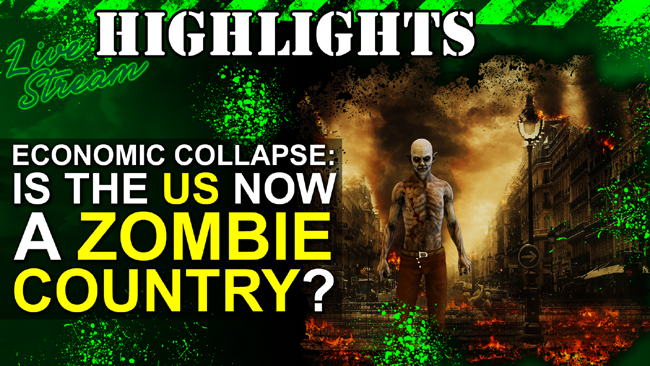 You’ve probably heard of zombie companies… but have we now recognized the birth of a zombie country in America and the escalation of our economic collapse?

In this video, we examine the actions of the Fed (who are bailing out the 1% and driving a further massive expansion of the wealth gap–looting the middle class to stuff the pockets of the rich and elite) and the alarmingly poor fiscal condition of the US government.

As our national debt continues to soar, it just reinforces the fact that our economic system is unsustainable and we make the case that the US has become a Zombie country–one that can only pay the interest on its debt (but not the principal) and, as such, requires creditors to put it (us) on financial life support.

We have borrowed all the future we have, dug a hole we can no longer dig ourselves out of, and are now a dead (zombie) “economy” walking. As such, we are now facing the very real potential of economic collapse.

Which begs the question: How long before our creditors pull the plug on their terminal patient???

Furthermore, how will this ailment impact us as a nation as we seek to defend ourselves against aggressive Chinese expansion and UN pressure to fall in line with the rest of the world on Agenda 21/2030?

As an economic superpower in decline, will we have enough strength and stability to maintain our position of independence atop the rest of the world… or will our sovereignty continue to erode as we plunge toward a dystopian future of dependence on and submission to authoratarian globalism/technocracy?

It will not happen overnight, but it is becoming nearly impossible to rationally argue that our ultimate destination is not economic collapse… it has become all but inescapable.