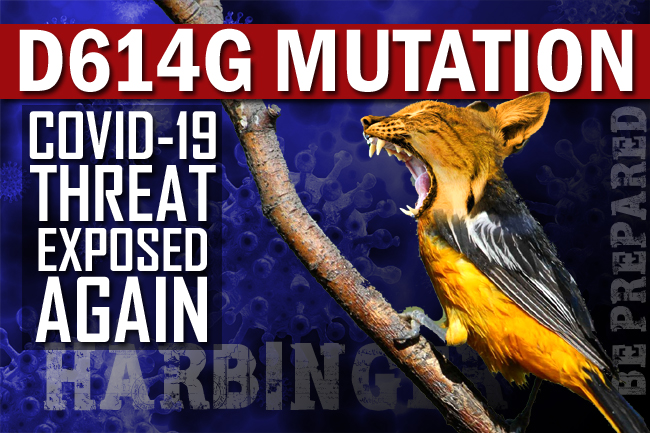 A very tiny mutation—known as D614G—to the Covid-19 virus first emerged onto the world stage around late January. That mutation appears to have been naturally selected—taking over as the dominate strain in the US and Europe, as well as recently emerging in Beijing. This mutation has significantly increased the infectivity of SARS-CoV-2, and possibly its virulence—once again highlighting the immense threat this nasty and sneaky virus poses for all of us.

In a nutshell, the mutation significantly increases the ability of the virus to infect cells by materially increasing the number of functional spikes on its surface.

Researcher and senior author of a recent study of the mutation, Hyeryun Choe, PhD, notes, “Viruses with this mutation were much more infectious than those without the mutation in the cell culture system we used.”

SARS-CoV-2 features a number of spikes that extend from its body (which gives the coronavirus its crown-like appearance). These spikes function as the docking apparatus that allow the virus to bond to target cells in our body—for example, via ACE2 receptors.

The virus bonds with these receptors and then the spike proteins are cut or “cleaved” (very efficiently thanks to the furin cleavage site added at the Wuhan lab). This cutting allows the virus to inject its RNA into the target cell, where it is replicated over and over again (like a viral factory)—to be spread throughout the body, where the process is repeated ad nauseam.

However, these spikes—resembling inverted tripods—have been relatively unstable, with many naturally breaking at the base and becoming non-functional.

In fact, studies have found that as little as 25% of spikes are able to maintain their structure and functionality. This has limited the transmission of the virus—serving a natural dampening function.

This tiny, one-amino acid mutation changed all that by replacing an aspartic acid with a glycine in the structure of the protein spikes. This appears to provide the structure with increased flexibility—reducing the “breakage” problem inherent in the CoV-2 protein spike.

Think of it as a brittle tree trunk. When the winds blow, the trunk will have a tendency to snap at its base. However, with a degree of flexibility, it will, instead, sway but not break. These spike proteins are similar. The D614G mutation allows them to “sway” when moved by fluids in our bodies, rather than breaking at their weak points (the base) and losing their functionality.

As a result, the study notes that “The number—or density—of functional spikes on the virus is 4 to 5 times greater due to this mutation.”

Researchers note that this mutation was absent from viral samples submitted to the GenBank database in February. However, by March is was represented in 25% of submitted samples. And by May, it was found in 70% of all samples.

Co-author of the recent study, Michael Farzan, PhD, notes, “Over time, [the virus] has figured out how to hold on better and not fall apart until it needs to. The virus has, under selection pressure, made itself more stable.”

Virologist William Haseltine, who has reviewed the study and its findings, asserts, “It is significant because it shows the virus can change, does change to its advantage and possibly to our disadvantage. It has done a good job so far of adapting to human culture.”

He added, “Sometime in the middle of January, there was a change that allowed the virus to become more infectious. It doesn’t mean it’s more lethal… [but] it makes it about 10 times more infectious.”

In April, researchers at Los Alamos National Laboratory noted the same thing, labeling the D614G mutation “of urgent concern” given that is had become the most common strain of the virus spreading in Europe and the US.

RNA viruses are notorious for their ability to mutate quickly and with relative ease. Many had hoped that Covid-19 would not be as prone to do this. That hope is quickly vanishing.

D614G Mutation: What It Means for the World & a Potential Vaccine

The good news is that this mutation may not negatively impact current vaccine research. Some studies in Europe have reported that neutralizing antibodies for other strains appear to be equally effective in neutralizing this mutated strain.

However, researchers in China are reporting that this is not the fact. They assert that serological antibodies in patients who successfully fought the original strains of SARS-Cov-2 in China failed to neutralize the D614G strain that has made its way into China from Europe.

While we must handle information out of China with a heightened degree of professional skepticism, it is clear from the reaction of authorities in Beijing that they are taking this new outbreak deadly seriously. An outbreak of just 228 infections with the D614G mutation has resulted in the new testing of 2.2 million residents in a massive and dire effort to contain its spread.

The risk to vaccine development around the world is massive. Most—if not all—current vaccine candidates (including those in the US and Europe) are predicated on the earliest strains of the virus—those detected and sequenced in Wuhan. In other words, they have been designed based on the pre-D614G version of the virus.

Dr. Huang (a member of the Chinese research team) warned, “Given the evolving nature of the SARS-CoV-2 RNA genome, antibody treatment and vaccine design might require further consideration to accommodate the D614G and other mutations that may affect the immunogenicity of the virus.”

In fact, the Chinese warning was backed by a detailed study by IBM’s AI medical team that warned in April that the D614G mutation could reduce the effectiveness of vaccine programs that target the virus’ spike protein. A conclusion that has been further supported by additional research by others since.

If it turns out that general Cov-2 antibodies are effective against this strain, it merely means we got lucky this time. The next time, the story may be entirely different. This demonstrates just how shaky our vaccine “hopes” are. Furthermore, it still leaves us with a virus that is considerably more infectious… and we still don’t know if it is more virulent (deadly).

Finally, it is worth noting that there are now several other strains with mutations that have been discovered and are being studied—at least two of which may be more virulent/potent.

This speaks to why it is so important to utilize caution when listening to so-called health experts, politicians, the media, and pharmaceutical companies. Just last week, the WHO—who has taken disseminating misinformation (and disinformation) to a whole new level—stated that mutations had not made the virus more easily transmissible. As with so much of what the WHO and these other “experts” say, this flies directly in the face of actual research and the data (damn those pesky little facts).

More often than not, their supposed authoritative “information” is materially biased by their overt and/or covert agendas—as was the case with the early and prolific lies regarding not wearing masks.

Don’t fall victim to the appeal to authority logical fallacy!

It is critical that we do our own research—from a wide range of source documents. The reality is that, in today’s world, you and I can no longer depend on or trust the word of the “authorities.” The train has left that station. We are on our own. We must become experts (or at least effective researchers) in different fields of study to truly understand the world around us.

Being a prepper is all about being able to identify potential threats (risks), determine the level of threat they pose, and then develop effective plans to mitigate them. You and I can’t do that if we are limiting ourselves to the messaging of authorities. We must learn to think, analyze, and develop conclusions for ourselves.

The D614G mutation demonstrates that the threat posed by Covid-19 is real… and it is ever changing.

While we can all hope for an eventual vaccine breakthrough (a silver bullet), that hope does nothing for us in terms of mitigating the current risk we face—individually or as a society.

Despite the well-intentioned wishes of many, the pandemic is not over… it is only beginning.

We need to understand our enemy so that we can make effective decisions—taking prudent and reasonable action to mitigate our risk in a way that both (1) understands and acknowledges the risk and (2) appropriately balances it with potential rewards. The goal is to skew the risk-reward equation in our favor.

As we have repeatedly stated, we are in for a long and difficult pandemic struggle. We all knew we were looking at an extended, 18- to 24-month crisis. Despite an average attention span that can only focus on things for a few months, the pandemic is not over. Nature, and her coronavirus, doesn’t care.

The D614G mutation is both a warning and a harbinger of things to come. Regardless of how bad this particular mutation may turn out to ultimately be, there will be additional mutations… and they could be even worse. They can happen at any moment. By the time we recognize them, it could be too late. We must remain on guard and focused on our safety and wellbeing. We must do what we do best—being prepared.

This doesn’t mean living in fear. Rather, it means empowering ourselves so that we can live with a sense of calm and confidence—content in the knowledge that we have done everything we can do to weather whatever mother nature (or humans) throws our way.

While we all hope that things get better quickly, please take this opportunity to continue prepping.

There is a high likelihood that things will get far worse before they get better. While I understand the desire of authorities to provide hope to the masses, be careful not to blindly embrace false hopes—only to be disappointed down the road… when it is too late to get prepared.

As always, hope for the best, prepare for the worst, and—in all things—pray.