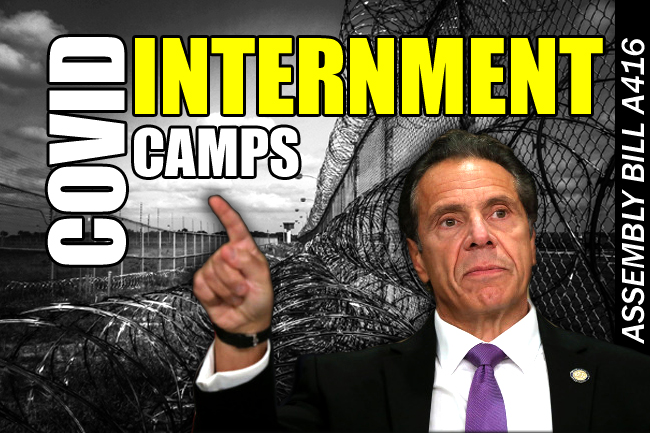 New York Governor Cuomo and the State Assembly are at it again. Not satisfied with their Bill A11179, which seeks to provide the state with the power to mandate COVID vaccinations at the sole discretion of public health officials, they are now working on another bill… Assembly Bill A416—to target, remove and indefinitely detain citizens in “health” internment camps at the sole discretion of the governor and with almost zero legal protections available to those detained.

We discussed Bill A11179 in our article 19 Lucid Reasons I Won’t Be Getting a COVID Vaccination, and we highly recommend you read it—as well as our article Did CDC Just Signal Green Zone (Isolation) Camps are Coming to US?

In introducing this draconian legislation, Cuomo and his merry band of Marxists are paving the way for the targeting and elimination of opposition voices—akin to the tactics employed by Nazi Germany, Stalinist Russia, the Iron Curtain during the Cold War, China, and a long list of totalitarian dictatorships.

You simply can’t make this stuff up folks… and it is deadly serious. Whatever rock you may have been blissfully sleeping under… it’s time to wake up!

The New York State Assembly has just introduced Bill A416—legislation that would remand people deemed to be “disease carriers” or “contacts” and indefinitely detain them in a facility chosen by the Democrat leadership of New York and under the sole discretion of the governor.

And remember, it was Governor Andrew Cuomo who issued the executive order that killed over 11,000 elderly Americans at the start of the COVID crisis by intentionally transferring COVID-19 patients into long-term care facilities, where they infected and killed defenseless senior citizens.

As stated on the New York State Senate website, Assembly Bill A416 “relates to the removal of cases, contacts and carriers of communicable diseases that are potentially dangerous to the public health.”

This proposed legislation, prefiled for January 6, 2021, and referred to the Committee on Health, would grant the Governor sweeping and unchecked powers to indefinitely detain American citizens in internment camps.

This leaves many asking the question: “Is COVID-19 being used to create an American gulag in the name of fighting a pandemic?”

Again, those who have been warning about FEMA camps for years now suddenly don’t appear to be such crazy conspiracy theorists after all—a point we drove home in our article New World Order Emerging: Not Such a Crazy Conspiracy Theory After All!

Furthermore, this shockingly unconstitutional and perverse legislation would apply to not only those who test positive to the virus (a.k.a. “carriers”) but to anyone suspected of being a “contact” of an identified carrier!

As The Gateway Pundit puts it, “The Governor would have sweeping powers to indefinitely detain American citizens and put them in internment camps.”

As stated in Assembly Bill A416, “In the event that the Governor declares a state of health emergency due to an epidemic of any communicable disease,” here is just some of what the bill proposes:

It’s hard to even wrap your head around the fact that this is an actual bill that has been introduced by the New York Senate???

As we mentioned above, these detainment efforts fall on the heels of proposed NY Assembly Bill A11179, which seeks to mandate COVID-19 vaccinations at the sole discretion of New York “public health officials.”

IF PUBLIC HEALTH OFFICIALS DETERMINE THAT RESIDENTS OF THE STATE ARE NOT DEVELOPING SUFFICIENT IMMUNITY FROM COVID-19, THE DEPARTMENT SHALL MANDATE VACCINATION FOR ALL INDIVIDUALS OR GROUPS OF INDIVIDUALS WHO, AS SHOWN BY CLINICAL DATA, ARE PROVEN TO BE SAFE TO RECEIVE SUCH VACCINE.”

Given not only the recently emerging mutated strains of the virus that are reported to possess a much higher rate of transmission but the widespread and significant lack of public acceptance of the vaccines, it is highly likely that these public health officials will ultimately pull the trigger.

After all, that’s why they’re preparing the way by implementing the necessary legislation—they are working from a carefully scripted plan.

Kenneth Garger, writing for the New York Post, has declared that an “alarming number of US health care workers are refusing [the] COVID-19 vaccine.”

For example, Ohio Governor Mike DeWine disclosed that about 60 percent of nursing home workers in his state have chosen not to get vaccinated.

California and Texas are also experiencing a high rate of health care worker refusal. The Los Angeles Times is reporting that 50 percent of frontline workers in Riverside County California alone have refused to be vaccinated, and NPR is reporting that as many as half the nurses at Houston Memorial Medical Center said “no thanks” and refused the vaccine.

And New York is no different, where more than half of the City’s EMS workers have declined to be jabbed—increasing the odds that public health officials will flex their muscle and mandate the vaccine (their plan all along).

This talking point is being increasingly utilized to both (a) motivate a rightfully hesitant public to get vaccinated by leveraging fear and (b) build the case to justify mandating it.

For example, Harvard epidemiologist Marc Lipsitch recently asserted that “a high percentage of vaccine refusal among not just health care workers, but the general population, could be problematic,” adding, “Our ability as a society to get back to a higher level of functioning depends on having as many people protected as possible.”

The stage is being set and the deck was stacked before the “crisis” (a.k.a. plandemic) even began. It is all part of the Great Reset and New World Order agenda to fundamentally transform the world—a transformation that largely hinges on bringing America to her knees and into submission.

The global elites are quietly paving the way for their Great Reset through draconian legislation at the state level, including New York Assembly bills A416 and A11179—legislation that will enable their puppets to mandate vaccinations, as well as indefinitely detain citizens. This leads the way to further suppression of views they deem to be at odds with their New World Order agenda.

Mandatory vaccinations are inevitable, and resistance will ultimately be crushed through the use of targeted detainment in internment camps.

Make no mistake. Do not be deceived. The ship is sinking folks, and our time is up… this is how it ends.

To learn more about the emerging New World Order agenda, including the vaccine, we encourage you to checkout our articles:

It has never been more critical to ensure you are spiritually prepared for what is coming!

Time is running out and the (a) rapture for believers and (b) start of the apocalypse (a.k.a. seven-year tribulation period) is far closer than any of us could possibly imagine.

Make sure you’re onboard the Ark that is Jesus Christ (or Titus213 Airline’s Flight #777 if you prefer) before God seals the doors shut and it’s too late!

You do NOT want to be one of those left behind!

Today is your day of salvation—a salvation that comes but one way: by grace alone, through faith alone, in Christ alone!