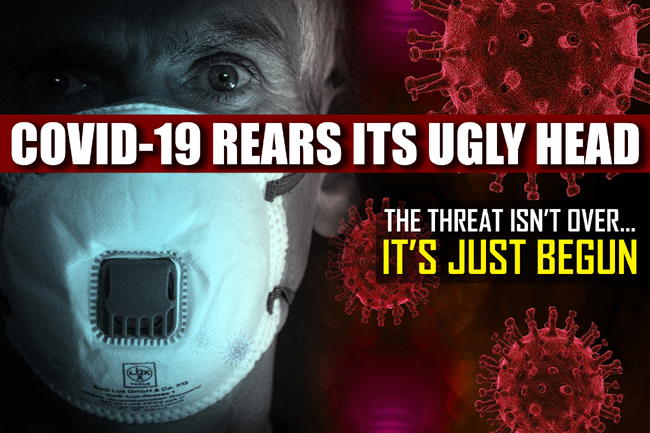 Let’s face it, there are a plethora of significant and emotional events unfolding in America that have rightfully captured people’s focus. However, there are only so many clowns you can fit in the clown car, meaning folks have a limited number of problems they can actively focus on at one time. As a result, many have chosen to throw Covid-19 out of their crowded car (mind). However, this veracious virus doesn’t care—and it is beginning to rear its ugly head and flex its dangerous muscles again.

The threat posed by this wicked virus isn’t over… it’s just begun.

Despite the dismissive attitude of many, across the nation, we are seeing a rise in coronavirus cases. While many well-intentioned but arguably uneducated folks have attempted to dismiss this as simply the product of more testing. However, the data doesn’t support the conclusion.

First, the percentage of positive tests has risen or remained steady in most of the states currently emerging as hotspots. This is a ratio and removes the impact of increased testing—allowing an apples-to-apples comparison.

Second, the hard number that really matters—hospitalizations—has been steadily soaring in a broad swath of states since Memorial Day. You can throw out all the other metrics—this is the one that matters. It is a real view at what the virus is doing, and it will directly impact hospitals and care levels (both for critical and non-critical, required and elective treatments and procedures)—and, ultimately, it will fuel the death rate.

North Carolina hospitalizations have been steadily rising for weeks—a trend that is beginning to put pressure on the hospital system and raise significant concerns among the healthcare community.

The state has also seen the percentage of positive tests climb and level off at 9 to 10 percent—a number materially higher than the warning level that the CDC and many experts established months ago.

In yet another hotbed state, Arizona’s largest hospital system warned over the past week that its intensive care units are filling up, ventilator use was on the rise, and capacity was reached for extracorporeal membrane oxygenation treatment.

“We have seen a steady climb of COVID-19 cases in Arizona over the last two weeks,” Banner Health tweeted Monday. “This trend is concerning to us, and also correlates with a rise in cases that we are seeing in our hospital ICUs.”

The emerging and highly concerning big picture that is being quietly missed (or ignored) by most Americans is that this pandemic is not over—it has just begun.

While we experienced a lull in the storm, such troughs are to be expected between wave peaks—both on a micro (within major waves) and macro (between major waves) level.

According to CNN, the number of Covid-19 hospitalizations since Memorial Day has gone up in at least a dozen states: Alaska, Arkansas, Arizona, California, Kentucky, Mississippi, Montana, North Carolina, Oregon, South Carolina, Texas and Utah.

And you can more than likely add Georgia and Florida to that list–we know there are issues in the accuracy of the data being released by those states (and they are on the list of states with rising cases).

The Covid-19 Vaccine: A False Hope for Salvation?

Furthermore, hopes that a rapid cure in the form of a vaccine are a pipedream—a false hope propagated by the government in an attempt to calm the masses and prevent a panic (one that would negatively impact the economy).

We can add two issues to the growing list.

First, if the vaccine was even 70 to 80 percent effective, it would require nearly every single American to get it in order to provide herd immunity. However, setting aside the likelihood of achieving this degree of efficacy with a coronavirus vaccine (especially given this propensity to mutate that this viral family is renown for), this idea that every American would get the vaccine is irrational and baseless.

Dr. Peter Marks, the director of the US Food and Drug Administration’s Centers for Biologics Evaluation and Research, acknowledges this reality when he aptly noted, “Remember that [if] 30% or 40% of the population will not take this vaccine, even if the vaccine effectiveness is 70 or 80%. We will not be in a position to have herd immunity.”

This raises a whole other risk to civil liberty: compulsory vaccination. This is especially concerning given the rush to develop these vaccines (the second problem).

Second, due to the rush to develop a vaccine, many typical steps and safeguards are being bypassed.

Researchers with Johns Hopkins Bloomberg School of Public Health assert that “most of them were lacking important scientific components. Those included not having control groups, which receive no treatment to compare results against, enrolling too few participants and not keeping both volunteers and clinicians unaware of who was or was not receiving treatment, which has been shown to skew results.”

“Given the urgency of identifying definitive evidence on potential Covid-19 treatments, this is an instance where we wish we did not have to say ‘further research is needed’ because of basic trial design shortcomings and small trials,” lead author Hemalkumar Mehta, an assistant professor at the Bloomberg School of Public Health, said in a press release.

I don’t know about you, but I’m not in a big rush to take get a vaccine that will have been rushed into production!

Regardless, folks that are pinning their hopes on a quick resolution to this viral menace are, sadly, pinning those hopes to a falling star.

The inconvenient truth we must accept is that Covid-19 is not going away—it is here to stay for the foreseeable future.

Furthermore, it is not the impotent little bug that most have been so easily led to believe. To learn more about the true fatality rate of the virus and our projections, we encourage to read our article How to Calculate Covid-19 Fatality Rate: How Dangerous Is the Virus?

And, bear in mind, we are already into the least advantageous period for the virus—warm weather and folks spending more and more time outside.

While it is clear from the data around the world that seasonality will not significantly impact the virus, it the summer season will still have a dampening effect.

However, we are still seeing a surge in transmission and hospitalization—a trend gaining (not losing) momentum.

Just think about what that means for a potential second wave in the Fall—when the virus enters a very advantageous period, with temperatures dropping and folks moving indoors. And who knows what mutations nature will throw at us.

The message we are trying to deliver is that the threat remains real. It never actually went away—it just got bumped-out of people’s crowded brains.

When you combine this risk with the degenerating social, political, and economic condition, it is imperative that we (1) continue to prep and (2) continue to take steps to mitigate the risk in our personal lives.

As always, we strongly encourage our readers to continue hoping for the best, preparing for the worst, and—in all things—praying for God’s wisdom, protection, and guidance.