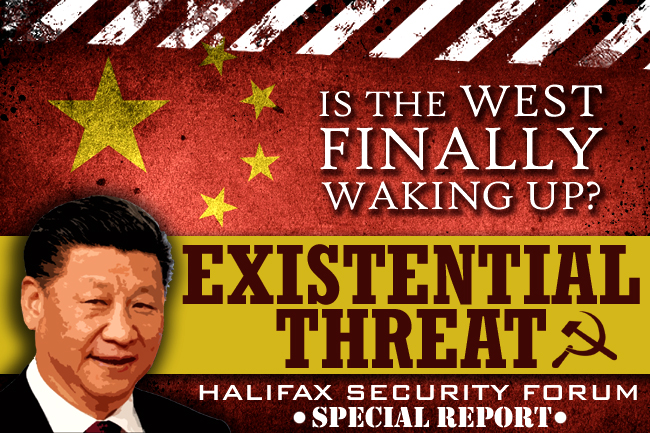 At nearly the same time China was announcing its signing of the Regional Comprehensive Economic Partnership (RCEP) with 14 other Asian nations, forming the largest trade pact in the world and further strengthening Beijing’s growing grip on the global economy, the West was releasing an alarming report on the clear and present existential threat posed by the People’s Republic of China (PRC), the Chinese Communist Party (CCP), and Xi Jinping.

The 93-page report (or handbook), China vs. Democracy: The Greatest Game, A Handbook for Democracies, provides a detailed appraisal of the China threat and was issued at the annual Halifax Security Forum in November of this year. It was predicated on bipartisan contributions from 250 top national security and foreign policy experts from across both the West and the political spectrum.

It is widely accepted that Napoleon Bonaparte once quipped, “China is a sleeping giant. Let her sleep, for when she awakens, she will move [or shake] the world.”

I would suggest that it is not the China giant that is awakening (it has been on the prowl for a while). Rather, it is the West that has finally been shaken from its slumber by the thunderous echoes of the giant’s footsteps.

And it would appear as though the participants in the Halifax Security Forum agree, as their report concludes that “Modern-day China has emerged as the most powerful authoritarian state in history and the major challenger to the liberal world.”

Again, it is we who are just now waking up to that problematic reality.

Which raises the million-dollar question: Are we too late?

Are we on an unavoidable collision course with China… one that will end in the demise of the American empire?

While we highly recommend reading the entire eye-opening report yourself (it is a virtual treasure trove of information), we want to take a moment to briefly share some of the most important takeaways from it—takeaways that highlight the escalating geo-political and economic risks that we all need to recognize, understand, and mitigate through effective and appropriate prepping.

The first takeaway from the Halifax Security Forum report is that the approach of America and the West to China has been an epic failure—both in its failed understanding of the true underlying threat and its failed policies.

The report states, “Democracies have acknowledged implicitly and explicitly that their approach to Beijing over the last three decades, and especially under the leadership of Xi Jinping, General Secretary of the Chinese Communist Party, amounted to a foreign policy miscalculation of historic proportions.”

What was the source of this error?

According to the bipartisan experts, “The central error was the assumption that China would eventually liberalize, uphold the rules-based international order, and cooperate with the democratic world as it accrued the benefits of capitalist economics.”

This has been the mantra of the Left for decades regarding all authoritarian regimes—not just China. It’s the failed argument they’ve made to support their impotent negotiations with Iran and North Korea regarding their nuclear programs.

It’s the age-old (and utterly fallacious) belief that if we just play nice in the sandbox, everybody will like us and want to be like us—a “kumbaya” approach to foreign policy.

However, the reality is that totalitarian regimes just see this as weakness and an opportunity to expand their ambitions of power and control in the world.

This is precisely the conclusion the forum reached, writing, “Rather than moderate its behavior at home and abroad, however, modern-day China has emerged as the most powerful authoritarian state in history and the major challenger to the liberal world.”

Looks like the hardline approach of the Trump administration—though arguably not “cool” or “friendly”—was in fact that proper approach to confront many of the existential threats America—and the West at large—faces in today’s rough and tumble sandbox.

Liberal ideology continues to fail to recognize the depraved nature of humanity. It is not the environment that generates wicked behavior… it is the sin nature in man’s heart.

The second takeaway deals with the global ambitions of Jinping and Beijing.

The report aptly notes, “The key to understanding the nature of the China challenge is to recognize that Beijing’s worldview is guided, above all else, by the interests of a Chinese Communist Party (CCP) that is Leninist to the core,” adding, “Failure to internalize this central point will lead to misdiagnosing the challenge and result in continued policy mistakes.”

On the economic front, China has leveraged its One Belt One Road Initiative and utilized major Chinese companies (which are beholden to the interests and instructions of the CCP) to expand it economic influence and control around the world.

On the military front, China has taken dramatic steps to modernize its military complex and flex that toned muscle across the region—including along the Indian border, in Hong Kong, and against Taiwan.

The Forum notes, “While the CCP continues to target democracies such as the United States, Canada, Great Britain, Germany, India, Japan, and Australia, it is Hong Kong and Taiwan that stand on the frontline of the PRC’s global assault on democracy; their very existence as democracies now hangs precariously in the balance.”

Recognizing what many have failed to grasp, the report asserts that “[w]hat may sometimes look like innocent and incremental steps risk developing into a pattern that… could transform the balance of military power as well as the relevance of alliances and partnerships among democracies.”

Exposing the Nature of the Chinese Threat

The third takeaway deals with the underlying nature of the Chinese threat—the nature that drives its ambitions and outward behaviors.

As with the global ambitions of China, the report also advances three fundamental truths regarding this underlying nature of China:

This reflects precisely what we—and many others—have been warning about for some time now.

For example, we recommend reading our articles:

Furthermore, I would suggest adding a critical fourth driver of the CCP ambitions—namely, Xi Jinping believes that the “mandate of heaven” has been bestowed on him to expand the Chinese empire (or, in American terms, to “Make China Great Again”).

Based on this self-supposed calling, Jinping is driven—as are most totalitarian leaders—to establish his mark on the pages of Chinese history and place himself alongside the great emperors of all those glorious Chinese dynasties of old. We discuss this mandate in more detail in our article Prelude to War: Joint US-Japan Military Exercises & Harpoon Missiles.

At the end of the day, the West—and specifically America—got it completely wrong with China. The progressive belief that we could love China into changing its nature, ambition or behaviors was foolish.

As the Halifax Security Forum report makes expressly clear, “The only stakeholder that Beijing is interested in accommodating is the Chinese Communist Party (CCP). Democratic China is a mirage… [and] the harsh truth is that, collectively, we got China wrong.”

We find ourselves now living in a highly dangerous world. Despite the cries of “peace and security,” things are getting worse not better… and they’re getting worse at an ever-accelerating pace.

Whether it’s the Middle East, Iran, Russia, North Korea, or China… we are attempting to navigate a deadly minefield like has never been seen before. Everywhere you turn there is a proverbial powder keg… just waiting for the inevitable spark that will set it off without warning.

But it’s more than that. The dangers we face collectively and as individuals include not only geopolitical risks but social, economic, and spiritual ones.

It has never been more important to ensure that you and your family maintain broad situational awareness and are both physically and spiritually prepared for the chaotic and cataclysmic outcome that is now all but inevitable for planet earth!

We are not entering some golden age of humanity. I don’t care what the NWO promises you, we are not heading for a glorious utopian future. The ship is sinking… and it will go down.

Don’t go down with the ship! Be as physically prepared as you can and—most importantly—get on the life raft that is Jesus Christ!

Don’t miss the great escape (a.k.a. the rapture) and get left behind. Today is your day of salvation!

Salvation by grace alone, through faith alone, in Christ alone is the only answer—there is no other means by which you and I can be saved.