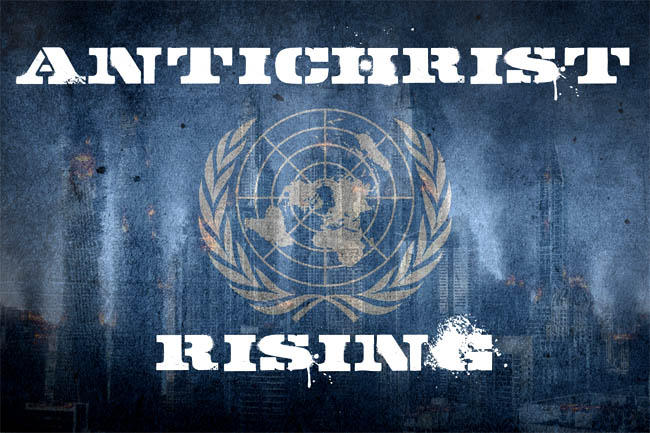 Ultra-Orthodox Jewish Rabbi Chaim Kanievsky recently claimed he was in ongoing communication with the “Messiah” and that his appearance is imminent. Properly translated that means the Antichrist is about to rise—signaling the start of an apocalyptic period of destruction for the world as God pours His wrath out on mankind (as in the Days of Noah) and finishes the redemption of His chosen people—the Jewish nation.

Specifically, Rabbi Yaakov Zisholtz stated during a radio interview that Rabbi Kanievsky—one of the two or three top rabbis in the Orthodox Jewish community in Israel—personally told him that he is in direct contact with the anticipated “Messiah.”

In fact, Zisholtz added that he and other mystical “concealed” rabbis have now given Kanievsky the critical responsibility of informing the public about the “Messiah’s” imminent arrival.

Kanievsky’s claim follows closely on the heels of numerous prominent Jewish rabbis declaring that the Messiah is about to be revealed to the World, a developing situation that we have discussed in detail:

It has even been reported that Kaneivsky has requested that a special glima—a ceremonial white robe—be prepared for him to wear when he greats the “Messiah.”

Rabbi Yaakov Zisholtz Warns Tribulation Is about to Begin

Rabbi Yaakov Zisholtz warned that “the process of redemption is about to start happening very quickly and at a fast pace.”

That process of redemption is the seven-year tribulation period—a known as Daniel’s 70th week or the time of Jacob’s trouble in the Old Testament.

The anticipation has risen to such a high level that most of Israel’s prominent orthodox rabbis are afraid to leave Israel lest they miss the arrival—and they are passionately exhorting Jews abroad to return to Israel as quickly as possible. For example, Rabbi Daniel Asor warned:

The United States and China will go to war against each other… Once the war between America and China is waged, martial law will be enforced which will shut down the highways, seaports, and air travel throughout the USA… This is why it’s so important for Jewish Americans to leave and come to Israel.”

Furthermore, Zisholtz specifically stated, “Haven’t you heard of Gog and Magog? That is what is going to happen very soon. Right now, the situation is explosive more than you can possibly imagine.”

As we’ve written about, a growing number of rabbis are warning about this imminent war (prophesied of in Ezekiel 38 & 39). We would be wise to listen given the fact that they know the Old Testament as well as anyone and have clearly read the proverbial tea leaves in the wake of the Abraham Accords, the posture of Turkey, and the troubling and deteriorating environment in Syria (including increasing Russian involvement).

To learn more about how the Abraham Accords are setting the stage for an imminent war in the Middle East, we highly recommend reading our articles Abraham Accord—What Is God’s Perspective on Peace & Security? and Abraham Accord Deception: Sudden Apocalyptic Consequences?

In fact, Rabbi Asor has not only warned of a coming war between China and the United States (see above) but adds that “Russia will join China in the war,” noting that this war will be the biblical war of Gog and Magog.”

This is actually in line with our assertion that Russia and China—whether in a soft partnership or hard military alliance—will strike simultaneously.

Russian (with Turkey, Iran, and a coalition of other nations) will strike Israel in the Middle East and China (with North Korea) will strike the United States—likely in conjunction with a Taiwan invasion.

For more on the Sino-Russian threat, we recommend reading our articles:

For more on Rabbi Asor and his prophetic statements, checkout our article Jewish Anticipation Grows—Rabbi Asor Says Coming of Messiah at Hand?

Zisholtz also referred to Rabbi Dov Kook and his prophecy regarding the Sea of Galilee and a direct link to the coming of the “Messiah.”

Ten years ago, Israel was in the midst of a severe drought—one that was having a terrible impact on the Sea of Galilee. He was asked when the Sea would be full again. His answer was that it would be full again at the time of the “Messiah’s” arrival.

Note, the Sea of Galilee is expected to be full for the first time since Rabbi Dov Kook made his statement within a few weeks.

Rabbi Zisholtz also pointed to the now expected third failure to solidify a functioning Israeli government as another sign of the appearing of the “Messiah”—one that was prophesied by Rabbi Yitzhak Kaduri, Rabbi Sasson Hai Shoshani and Rabbi Yekutiel Fish (discussed in our article Signs & Prophecies Emerging from Israel—Last Chance to Get Prepared?).

All of this echoes the recent declaration by Rabbi Shlomo Amar—the former Sephardic Chief Rabbi of Israel—that:

All the great rabbis of this generation are saying that the Messiah is about to reveal himself. All the signs the prophets gave, all the signs predicted in the Gemara, the Mishnah, the Midrash, everything is taking place, one by one. All we need is to remain strong for a little bit longer.”

Why Does it Matter What the Rabbis are Saying?

Again, it’s important to ask yourself, “Why does it matter what the rabbis are saying?”

I would argue that there are four core reasons we should at least note what they’re saying, and it all falls under the banner of situational awareness.

First, whether the source of their insights is Godly or demonic, it clearly indicates there’s something unique and very significant going on behind the scenes in the spiritual realm.

Second, should their “Messiah” be revealed, it would signal the imminent start of the seven-year tribulation period—something that just might be important for preppers!

Let no one deceive you by any means; for that Day will not come unless the falling away comes first, and the man of sin is revealed, the son of perdition” (2 Thessalonians 2:3).

Third, the war of Gog and Magog will be a missive conflict that will directly and indirectly impact the entire world—including the potential for a simultaneous strike on America by China. I would assert this is a real possibility for three reasons:

Fourth, it reveals just how close we are to the rapture of believers in Christ—we must depart before these things can unfold. In other words, the doors of the Ark that is Jesus Christ are about to be closed. Those not onboard will left behind to face the apocalyptic tribulation period.

Don’t think that’s a big deal? I would highly recommend reading our article Coming Apocalypse: Are You Really Prepared for Armageddon?, as well as Are You Prepping to Survive or to Escape the Coming Fiery Furnace?

Thus, these four reasons alone demonstrate that it is worth at least considering and keeping an eye on the growing chorus of Jewish rabbis expressing never before seen levels of excitement and anticipation regarding the soon coming of their “Messiah.”

Situational awareness is always critical… make sure you are maintaining it.

Caution: The Rabbis’ “Messiah” is Not Going to Be Who They Think (Hint: He’ll Be the Antichrist!)

To be clear, if the rabbis are correct and they present and embrace a soon coming “Messiah”, this individual will NOT be The Messiah of Scripture—that individual is Jesus Christ.

Rather, this individual will be the Antichrist—the false messiah.

Again, this person will be the Antichrist—whom (1) the Jewish nation will initially embrace (until they realize their error at the mid-point of the tribulation) and (2) will form and lead a one-world government and one-world economy, in partnership with the False Prophet’s (Pope) one-world religious system (predicated on an Abrahamic faith that blends Christianity, Judaism, and Islam).

Interestingly, Rabbi Asor himself even recognizes what is coming, declaring that the coming war of Gog and Magog will “pave the path for the inevitable takeover of the New World Order that is headquartered in the Vatican.”

For more on the emerging one-world religious system (a.k.a. Chrislam) and the role of the Vatican and Pope, we recommend reading our articles:

One might ask how it is that these ultra-orthodox Jews could be deceived.

I would argue that part of the answer lies in the Third Temple. These Jews are absolutely obsessed with the rebuilding of the Temple… and the coming Antichrist, New World Order, and one-world Abrahamic false religious system will make that happen. They will be blinded by this great achievement and deceived into backing Satan’s man.

However, again, God makes it clear that they will realize their mistake at the mid-point of the tribulation and will turn back to Him.

If you’re interested in learning more about the coming Third Temple, I would recommend reading our article Red Heifer a Harbinger of the End Times—Prepare for Apocalypse?

At the end of the day, we need to be prepared. What is unambiguous is that prophetic events are unfolding at breakneck speed. Whether it is of God or demonic origin, the growing chorus of rabbinic prophetic statements demonstrates that there is clearly a surging and passionate expectation of a soon appearance of a messianic figure.

When combined with all the signs being witnessed in the world today and the framework of prophetic Scripture, it is patently evident that we are on the very doorstep of the tribulation period.

Do not be deceived—the single most repeated warning in the New Testament.

We would be wise to remember the words of Jesus and take them to heart:

So, what exactly should we do in light of everything going on in the world around us?

I would suggest there are two fundamental things you can and should do immediately:

#2 Do not be deceived—Test everything against God’s Word (read Spiritual Prepping 101: Be Like a Berean & Test Everything)