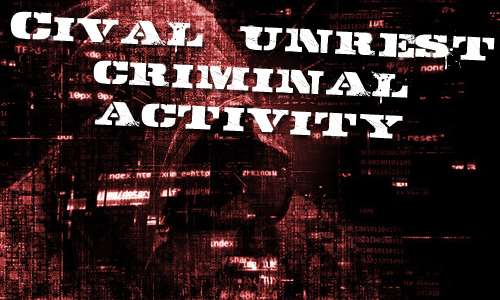 Is Italian social unrest and criminal activity headed to a town near you?

Italy is providing us with a glimpse into our own potential future here in America. As their lockdown drags on, the cracks in the social construct are beginning to widen—meaning social unrest and criminal activity are escalating exponentially just like the virus itself!

The lockdowns in Italy began on February 21, with lockdowns targeted to 11 cities. This was expanded to most of northern Italy on March 8, including the hard-hit Lombardy region. However, it was really the expansion to a national lockdown on March 9 that took things to a whole new level—an expansion that was further tightened on March 11, March 14, and March 21.

Though not as hard-hit (yet) as the northern region of Italy, it is southern Italy where we are beginning to see rapid increases in civil unrest and criminal activity (likely promoted by underground gangs and the crime families—yes, they are still very powerful in Italy).

I say “yet” because—despite the lockdown—many northerners migrated (i.e., fled) to the south. This is not unlike what we are seeing with New York: folks fleeing to north into New England and south (especially Florida). Italy is now reporting a surge in cases building in the south!

So, you couple a surge in Covid-19 spread with masses of unemployed (and very unprepared) citizens, and it is only natural that you will produce a nasty cocktail of unrest and crime—something we are now beginning to see:

Italian Unrest? Here’s Why It Matters!

Why does this matter? Why should we care about social unrest in Italy?

We should care deeply because it foretells our potential future here in America.

We are running about 2-3 weeks behind Italy. The crisis in northern Italy—and the governments slow but eventually aggressive response—mirrored events in our own country… delayed by a few weeks.

If the unfolding virus scenario foretold how things would play out for us, then it would only be prudent to view the civil unrest and criminal activity now surging in southern Italy as a warning for us! Afterall, if we mirrored the virus outcome, then why would we expect to not mirror the societal impacts as well?

I’m not saying we are headed for an apocalyptic landscape… however, I am strongly cautioning all to embrace the potential that civil unrest and criminal activity will surge in the US as the lockdowns grind on and the virus crisis builds!

Making the matter even more concerning is the number of first responders (police and fire) that are either (a) sick or (b) self-quarantined due to exposure. For example, an AP report published just days ago indicated that more than a fifth of Detroit’s police force has been quarantined, two officers have died from the coronavirus, and 39 have tested positive—including the police chief.

And this is happening across our nation with increasing frequency and intensity.

This means that not only will we be dealing with social unrest fueled by fear, boredom and dumb people, but the very real potential for looting, break-ins and violent crime due to (1) dwindling resources (financial, food, drugs, etc.) and (2) a criminal element that will seek to take advantage of the opportunity—made larger by an increasing degradation of our emergency services ability to respond to and deal with the surging demand.

Be warned. Many of us were warning folks back in late February and early March to look at China and Italy regarding the potential impacts of Covid-19 and an escalating and unstoppable pandemic.

Thankfully, many of you listened and heeded the warning… and, as a result, were mentally, physically and financially prepared—or at least more prepared than you otherwise would have been.

However, many slow adjusters ignored the warnings and buried their heads in the sand—resolute that their picture of reality couldn’t change.

Again, now is the time to prepare yourself and up your security plans and protocols!

As always, the key is maintaining situational awareness—at home and in public. Don’t put yourself in a bad situation in the first place or provide an opportunity to be taken advantage of.

Having food, water and medical preps is great… but it means nothing if you don’t have security!

Be smart, stay safe… and remain vigilant and security conscious!