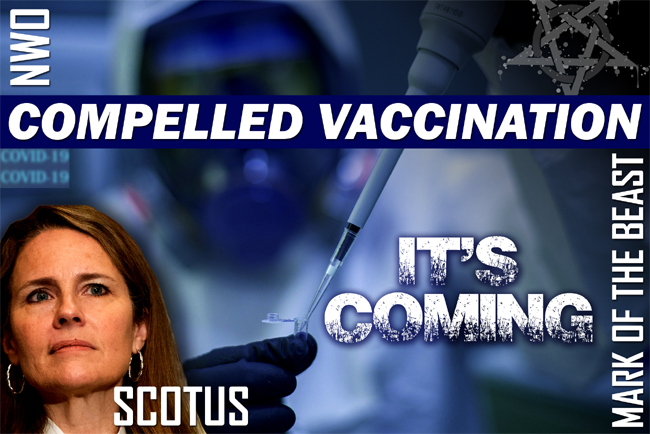 There has been a deep collective sigh of relief amongst conservatives with the successful appointment of Amy Coney Barrett to the US Supreme Court—one representing a broad belief that the SCOTUS will now suddenly become a bastion of conservative values. To which we have warned… not so fast! Case in point is the notion that a Covid vaccine will never become mandatory. Do not be deceived my friend… the Supreme Court will back a mandatory vaccine and further dismantle constitutional liberties in America.

It’s important to understand that the idea of compulsory Covid vaccinations is no longer some far-fetched, hypothetical scenario. On November 7th, the New York State Bar Association passed a resolution urging the state to consider making it mandatory for all New Yorkers to undergo COVID-19 vaccination when a vaccine becomes available, even if people object to it for “religious, philosophical or personal reasons.”

With that in mind, it just so happens that we have a very recent ruling by Barrett that sheds quite a bit of light on how she views and may rule on the question of mandatory vaccines.

This appeals case dealt with the scope of lockdown restrictions implemented by Illinois Governor Pritzker. However, in dealing with the issues at hand in this unique case, the justices—including one Amy Barrett—also raised the question of compulsory vaccinations when they approvingly referred to Elim Romanian Pentecostal Church v. Pritzker, 962 F.3d 341 (7th Cir. 2020) and Jacobson v. Massachusetts, 197 U.S. 11 (1905).

Even though we held in Elim that the Governor was not compelled to make this accommodation to religion, nothing in Elim, and nothing in the Justices’ brief writings on the effect of coronavirus measures on religion, says that he was forbidden to carve out some space for religious activities.”

Here we have Barrett signing off on jurisprudence that unambiguously asserts that the state is not compelled to make religious accommodation when it comes to public health issues, such as the coronavirus pandemic. She clearly believes that while the state can make accommodations (as Governor Pritzker did in this case), but it is not required to do so.

Stated differently, the government—both at the state and federal level—can shutdown the practice of religion in America if the powers that be determine it to be in the “best interest” of the people due to a health crisis.

So much for the Free Exercise Clause of the First Amendment to our Constitution.

But it gets worse… much worse.

Wood, Barrett and St. Eve go on to discuss the specific issue of compelled vaccinations, writing, “As we noted in Elim, the Supreme Court addressed this type of measure more than a century ago, in Jacobson v. Massachusetts, 197 U.S. 11 (1905).”

This landmark Supreme Court case revolved around vaccine requirements mandated by the City of Cambridge in response to a smallpox epidemic.

A gentleman who did not wish to be vaccinated brought a lawsuit against the city, contending that the City’s requirement violated his Fourteenth Amendment right to liberty.

The case made its way to the Supreme Court, which ruled in favor of the City—establishing that the state can, without violating any Constitutional rights to liberty, compel individuals to take vaccinations.

Regarding this ruling, Justices Wood, Barrett and St. Eve write:

In so doing, it held that it was appropriate to defer to the City’s assessment of the value of vaccinations—an assessment, it noted, that was shared ‘by the mass of the people, as well as by most members of the medical profession… and in most civilized nations.’ Id. at 34. It thus held that ‘[t]he safety and the health of the people of Massachusetts are, in the first instance, for that commonwealth to guard and protect,’ and that it ‘[did] not perceive that this legislation has invaded any right secured by the Federal Constitution.’ Id. at 38.”

In other words, Amy Coney Barrett just ruled (in September) that the “greater good”—be it established by popular opinion, a marjoram of the medical community, or technocrats of the state—trumps your individual constitutional liberties and God-given right to determine whether or not you wish to take a vaccine.

This seems to be the view of the medical community as well, with Dr. Michael Ewer, a visiting professor in the Health Law and Policy Institute at the University of Houston Law Center, stating the President “has the power to say we will have a more uniform approach to public health measures,” adding that the Constitution gives the federal government the power to protect the general welfare, and the courts have generally supported restrictions on individual rights to that end.

Remember, there are deep ties between the World Health Organization, big pharma, Bill Gates (and his extensive vaccine network), and forced vaccination programs around the globe—and Biden has stated that he would rejoin the World Health Organization, which Trump began to withdraw from in July, and reestablish the White House National Security Council Directorate for Global Health Security and Biodefense, which was eliminated by the Trump administration in 2018.

It is nearly a guarantee that the US will rejoin the WHO on January 21st—the first day of a Biden presidency.

And, Dr. Eric Toner, a senior scholar with the Johns Hopkins Center for Health Security, expects that the United States will strengthen its connections with the United Nations and join the international vaccination effort (a.k.a. the COVAX initiative).

The medical “experts” and technocrats are already pushing for new lockdowns (see the tweets below from Dr. Tom Frieden, former Obama CDC director and presumed advisor to Biden)… how long do you think it will take for them to add compulsory vaccination to their laundry list of control measures?

And what about the Vatican? As we noted in our article Catholic US Supreme Court—Pope & Vatican Poised to Usurp Constitution, how do you think the overwhelmingly Roman Catholic Supreme Court will rule when Father Francis declares that it’s “God’s will” that all be vaccinated???

And Barrett is not alone. Sadly, Chief Justice John Roberts and countless U.S. district court judges across the country have relied on the 1905 mandatory vaccination decision Jacobson v. Massachusetts to allow virtually unlimited power to be exercised by state and local governments during the COVID-19 pandemic.

Harmeet Dhillon notes that “the Supreme Court has refused to even review many examples of gross government overreach in the name of ’emergency powers’,” adding, “Jacobson’s dark history includes justifying forced sterilization of mentally challenged adults, something that is now viewed as barbaric and unconstitutional.”

The Supreme Court will likely have an opportunity to revisit its Jacobson ruling given the growing push for mandatory Covid vaccinations. However, while many assert that Barrett will be the critical swing vote to reverse the Court’s position, I would not hold my breath on that!

Why does it matter?

Understand, God makes it clear that it is the False Prophet (Pope) who will compel the world to take the mark of the beast:

And I beheld another beast [the False Prophet] coming up out of the earth; and he had two horns like a lamb, and he spake as a dragon… And he causeth all, both small and great, rich and poor, free and bond, to receive a mark in their right hand, or in their foreheads: And that no man might buy or sell, save he that had the mark” (Revelation 13:11, 16-17).

And what will happen to those that take the future mark? God’s Word tells us:

If any man worship the beast and his image, and receive his mark in his forehead, or in his hand, the same shall drink of the wine of the wrath of God, which is poured out without mixture into the cup of his indignation; and he shall be tormented with fire and brimstone in the presence of the holy angels, and in the presence of the Lamb: and the smoke of their torment ascendeth up for ever and ever: and they have no rest day nor night, who worship the beast and his image, and whosoever receiveth the mark of his name.” (Revelation 14:9-11)

As we argue in our article Mark of the Beast—Mandatory COVID Vaccination Message Begins, this mark system will be predicated on a coming mandatory vaccine.

I think we can reasonably infer that the SCOTUS (including the conservative darling Amy Coney Barrett) would uphold a mandatory coronavirus vaccine—especially when big pharma, big tech, the medical community, the federal government, the UN, the WHO, and the Vatican declare that it is absolutely necessary to uphold the greater good.

The New World Order is rapidly emerging, and it will intentionally and unabashedly use the health crisis and any potential vaccine as a means to extend and consolidate its power and control.

Do not be deceived and do NOT put your faith and trust in any man or woman, judge, court, or government body—you will be sadly disappointed.

None of this should come as a surprise… God foretold long ago exactly what we see unfolding in our world today. It has never been more important for you to be spiritually prepared… study His Word and stand on it!

There is only One Who is worthy of your faith and trust—Jesus Christ. He is the rock and all else is but shifting sand.

I encourage you to take a moment to read our articles The Ship IS Sinking… What Are YOU Going to Do as It Goes Under? and Are You Prepping to Survive or to Escape the Coming Fiery Furnace?